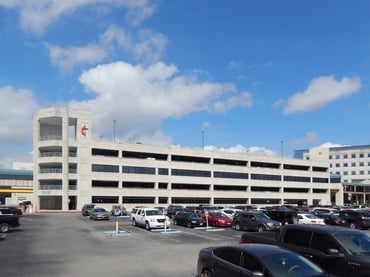 Methodist Hospital in San Antonio, Texas, offers a broad range of specialty healthcare services including cardiology, cancer care, bone marrow transplants, emergency medicine, neurosciences, maternity care, gynecology and orthopedics. It opened in 1963 with 175 beds and has since grown and expanded to encompass 1,019 beds making it the largest hospital in the city.

The campus includes four parking structures. Recently, Parking Garage 3, also referred to as the TNI parking garage due to its proximity to the Texas Neurosciences Institute (TNI), was in need of repair. Time and weather had taken their toll and the garage had extensive concrete damage. Spalling and cracks were evident, and in some areas the concrete had deteriorated down to the rebar. In other areas, it was loose and crumbling. The damaged concrete and deterioration over the years also loosened the expansion joint anchors, causing movement in the expansion joints. The parking garage appeared to have had minor repairs and light patchwork over the years, but now required a full restoration.

Chamberlin’s vast parking garage restoration experience and working relationship with Methodist Healthcare System of San Antonio led to them being selected to restore and waterproof the five-story structure. In addition to concrete patching and repair, Chamberlin installed approximately 240,000 square feet of horizontal water repellent and 65,000 square feet of traffic coating. Additionally, crew members sealed concrete cracks and saw-cut joints with over 25,000 linear feet of sealant and replaced 720 linear feet of expansion joints. Finally, the fire hose cabinets were replaced, and new speed bumps were installed. Chamberlin completed their scopes in eight months within budget and with zero safety incidents. The renovated garage is not only safer for its occupants, but also has a revitalized look to serve the hospital for years to come.

Chamberlin, the project engineer and the product manufacturers all had a hand in quality control for this project. The project team working together and observing the progress of the scopes throughout the job helped deliver a high-quality restoration that the owner was pleased with.

In some areas, the concrete had deteriorated down to the rebar. When exposed rebar gets wet, it rusts causing it to expand and damage even more concrete. To rectify, the damaged concrete was demolished to access the rusted rebar. The rust was then removed, and a rust inhibitor was applied. Chamberlin would then alert the project engineer so they could observe and approve the work. Finally, fresh concrete was poured into the area. For this and any other scope throughout the project that was to be covered with concrete, the project engineer would observe the work for quality approval before new concrete was poured.

The products used for the concrete repair, traffic coating and sealants were produced by the same manufacturer. This alleviated potential adhesion issues where different systems met, such as installing the traffic coating on top of a concrete repair mortar. The manufacturer also did quality checks throughout the project, observing Chamberlin crew members’ application methods and confirming their products were installed properly.

Chamberlin also monitored the quality of their work throughout the process. The project superintendent checked the quality of the crew’s installations each day and issued instructions for any deficiencies found. Crew members performed weekly pull tests on the joint sealants installed.

Chamberlin’s objective is to produce quality work, safely, at a competitive price with a spirit of cooperation. Chamberlin’s value “One Time” speaks to the high regard at which Chamberlin holds a quality installation. This value states, “No task is too small or too unimportant not to get it done properly the first time. Whether it’s a takeoff or estimate, correctly reporting your work hours by cost code, approving an invoice or installing material on a project, doing it right one time, the first time, is the basis for delivering successful projects. At Chamberlin we take pride in doing our work one time.”

Chamberlin’s project manager created a schedule of work for the owner at the beginning of the project. Having a plan in place helped coordinate the multiple scopes and keep the project on track as unknown conditions were discovered. Chamberlin met with the owner weekly, walked them through the project and gave updates on what had been accomplished and what was coming up. The owner appreciated this time spent to assure them the project was on schedule.

This garage served as parking for hospital tenants and also the general public. The garage remained occupied during construction Monday through Friday from 7:30am to 8:00pm. Therefore, Chamberlin could only work on half of one level at a time, leaving the other half open for use. The coordination of this required detailed pre-planning and organization. Chamberlin would give a one-week notice to the garage manager when they were finishing up one area and preparing to move to another. The tenants whose spots were going to be blockaded would be notified that they would not have access to their parking spot on the days we would be working there. Chamberlin crew members arrived at 5:00am to block off the work area before tenants and guests arrived.

Safety of the occupants was top of mind. The entire structure had to be shored while replacing the bearing pads on the fourth floor. Due to the stress that procedure places on the lower levels, Chamberlin felt it was too risky to have any persons or cars in the garage during that scope. Chamberlin performed this and many other scopes at night or on the weekends, utilizing those times when the parking garage was closed to occupants. Even though the garage was closed, Chamberlin crew members would stand post at the garage entrances to turn away any cars that may approach.

Open lines of communication and proactive thinking were key to successfully completing this project on time.

According to poet Robert Burns, “The best-laid plans of mice and men often go awry.” Although proper planning was in place and tenants were notified to move their vehicles several days in advance, often was the case that one or more vehicles were not moved. When that happened, Chamberlin could still work in that general area as planned but not in the immediate vicinity of the vehicle. If repairs were needed there, crew members would have to return at a later date when that parking spot, as well as the surrounding spots, could be safely blocked off for work.

The crew member’s own safety, along with those working around them, is a primary focus on every job Chamberlin undertakes. With the garage being open to the public, pedestrian safety also needed to be taken into account on this project. Tenants and guests unfamiliar with the hazards of a construction site or unaware of their surroundings would walk or drive around barriers set up to block off work areas. Speeding was also a frequent problem in this parking garage, hence the addition of the speed bumps. Chamberlin combatted this in two ways. They utilized nights and weekends for work time while the garage was unoccupied. When working while occupied, Chamberlin assigned crew members to be lookouts to direct pedestrians and traffic in a safe manner.

Chamberlin discovered an unknow condition when the expansion joint replacement began. At the bottom of each joint were conduits and embeds cast between the topping slab and the precast double Ts. These metal deflector plates ran the width of the joint. The original replacement consisted of a two-inch foam joint being placed in the bottom of the block out with the new expansion joint installed on top. However, the deflector plates would require each foam piece to be cut into multiple pieces to be installed in between the bars. That process would have been labor intensive and inefficient, so Chamberlin came up with a new plan.

Chamberlin fabricated stainless steel cover plates to be installed over the deflector plates, leaving a smooth substrate for joint installation. The cover plates were one inch thick and were followed with a backer rod and sealant to fill in the other inch. The expansion joint could then be installed on top as planned.

Another unknown condition was encountered while demolishing the concrete on the fifth floor, as the damage to the concrete was more extensive than anticipated. The cracks that were visible before beginning demolition did not reveal how far down the damage existed. The best approach was to remove all of the damaged concrete 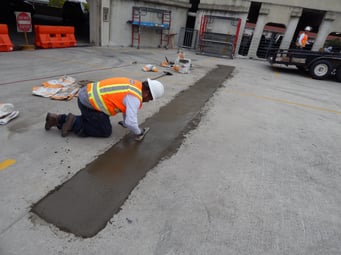 San Antonio saw a lot of rain in January and February during this construction. If the traffic coating is applied to wet concrete, a vapor drive would be created. In this condition, moisture trapped underneath the system evaporates through the coating as it dries, causing adhesion issues and ultimately system failure. Chamberlin crew members used moisture meters and mat tests to determine the moisture level of the concrete and install the traffic coating when appropriate. The schedule and work flow were also rearranged so crews could work in other places during these times, such as repairing lower levels that were not exposed to the rain.

Rain was not the only deterrent in installing the traffic coating. Heat and humidly also cause a vapor drive. As the outside temperature rises, the residual moisture in the concrete from the humidity is drawn out through the coating. If this happens while the traffic coating is still wet, the material will bubble and not adhere properly. The scope was moved to a night shift to install in cooler temperatures. These shifts typically ran from 8pm to 2am.

In fact for most of the project, Chamberlin was running night and day shifts and sometimes working seven days a week. Hours were extended and schedules were adjusted – whatever it took to get the scopes done on time while facing the difficulties of working in a functioning parking garage.

Chamberlin Superintendent Pablo Venegas offered the support and encouragement he knew the crew members needed throughout this project. He was onsite every weekend working with the crew. He consistently reminded them how critical it was to finish on schedule, despite the challenges. He was open with communication, making sure each crew member understood their tasks for the day and had the proper tools and safety equipment to execute productively. The crew did an outstanding job following his leadership with positive, can-do attitudes.

Chamberlin successfully restored the TNI parking garage on time and in budget leaving the structure revitalized and safe for the hospital’s occupants. 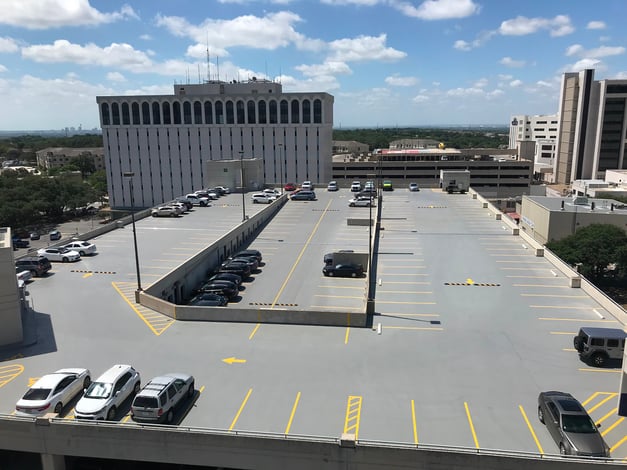