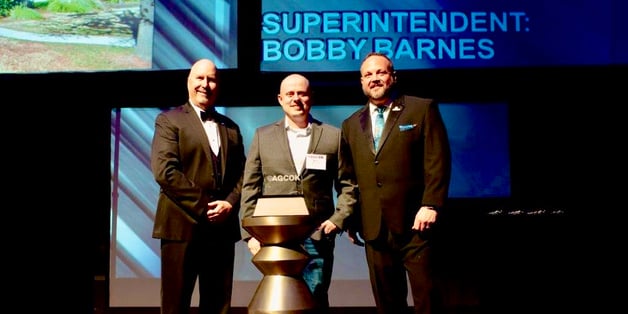 Chamberlin is honored to have received the Associated General Contractors (AGC) of Oklahoma Build Oklahoma Award for their work on the OU Research parking garage at the University of Oklahoma in Oklahoma City. This awards program represents the “Best of the Best” commercial building projects in Oklahoma for the year. Chamberlin accepted the award at the 82nd Annual AGCOK Awards Banquet on Saturday, February 5th at Cox Business Convention Center in Tulsa, Oklahoma.

Chamberlin Roofing & Waterproofing was hired to repair the concrete and install pedestrian and vehicular traffic coatings on the top deck plus stairwells. These processes included shotblasting, power washing and re-striping as well. Despite 49 days during the project schedule when weather conditions did not allow for installation, the project was still completed under budget and to the owner’s and project team’s satisfaction.

Read More About the Project

A Tribute to Ralph Ellison

Set to open in October 2021, the Ellison Hotel located in Oklahoma City, Oklahoma, will stand in The Triangle at Classen Curve and work in partnership with Ralph Ellison Foundation. It will...

Chamberlin is honored to have received the Associated General Contractors (AGC) of Oklahoma Build Oklahoma Award for their work on the Gaylord Family Oklahoma Memorial Stadium in Norman, Oklahoma....

Chamberlin is honored to...