Waterproofing Details Can Make All The Difference

INTEGRIS Baptist Medical Center in Oklahoma City, OK, opened Easter Sunday 1959 as a 200-bed hospital and was known as the “hospital on the hill.” Now it boasts 511 beds and offers a full range of surgical, diagnostic, therapeutic and rehabilitative services.

Fall 2015 kicked off a renovation of the hospital’s entryway. This re-design by HKS included a new canopy and curtainwall to bring more light and life to the hospital entrance. General Contractor Flintco Constructive Solutions selected Chamberlin Roofing & Waterproofing to install the hot fluid-applied waterproofing for this project.

The waterproofing scope played a major role in this particular project, as a basement housing highly sensitive medical equipment was located directly below the hospital’s entrance. Keeping this area watertight was pertinent to the hospital functioning and their patients receiving the care they need.

The Right System
An environmentally friendly hot rubberized asphalt waterproofing system was chosen for this project. This system was a great choice for the facility because it conforms to surface irregularities and fully adheres to the deck, restricting lateral water movement.

To begin, the failing waterproofing system was removed. After the concrete was demolished, the Chamberlin crew got to work removing the old waterproofing with scrapers and grinders. The desired effect of this removal process was a rough substrate to which the

new waterproofing system could easily adhere. Next, Flintco installed new curbs and mortar patching on deficient areas, and the hospital entrance was ready to receive the new waterproofing.

It’s All About the Details
Chamberlin started with the details. The crew applied flashing on the inside and outside corners of the curbs and around the drains. Cracks in the substrate were sealed. The details are imperative in these areas where cold joints are used to connect the concrete slab to the curb or drain. Areas that have to be connected with joints are more susceptible to leaks and substrate cracking. The flashing details reinforce the seal, adding an extra layer of waterproofing protection.

Next, the hot fluid-applied waterproofing was prepped for installation. This system requires blocks of the material to be melted in a kettle and reach 450 degrees before installation. Once melted, the liquid is transported in buckets from the kettle to the installation area, where it is poured out and applied evenly.

The Perfect Balance
Applying this liquid waterproofing at the correct millage, or thickness, is crucial. Incorrect millage can affect warranty coverage and the material’s performance. As the substrate expands and contracts over time, the waterproofing must be able to move with it. If it is applied too thick or too thin, its movement will be compromised and the system could leak.

Chamberlin had an idea. Based on previous jobs where they had faced similar circumstances, they created a detail that could isolate the first phase from the second phase. The project team agreed with the solution, and Chamberlin implemented the detail. 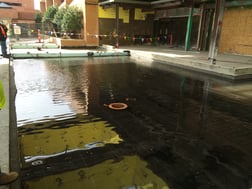 The Importance of Safety
Dealing with waterproofing material that is 450 degrees takes true attention to safety. If the material comes in contact with skin, it can cause high degree burns. Chamberlin’s crew members donned leather gloves and long sleeve shirts in addition to standard PPE.

Additional precautions were taken, such as taping the sleeves of their shirt to their gloves and tucking their pants into their boots so the hot product could not drip onto their skin.

Chamberlin had a dedicated crew member to man the kettle that melted the hot fluid-applied waterproofing. Starting two hours before the rest of the crew members, he got the kettle
fired and the material melting. He worked diligently throughout the day to keep the waterproofing material at the correct temperature for application, as it has to be heated to an exact temperature to bond correctly. He also stayed after work was completed for the day to ensure the propane tanks were off and the material was cooling safely. Throughout the duration of the project, the kettle area was barricaded off for protection of those working around it.

A Real Team Effort
Chamberlin was on a fast-paced schedule from the get-go on this project. They proactively worked to complete their scope in just two weeks. In addition to creating a detail to solve the potential dual-phase issue, they added additional manpower and worked overtime to keep the project on schedule. Great communication and collaboration from Flintco was a tremendous asset. In the end, Chamberlin applied approximately 11,000 square feet of hot fluid-applied waterproofing to the split slab at the hospital entrance leaving the area watertight and the medical equipment protected in the basement below. Teamwork truly made this project a success.