Waterproofing membranes are a key element in building enclosure systems—a key element that ultimately gets covered up by a variety of finish materials including landscaping, green roofs, topping slabs, pavers and so on. As most of us know, excavation to expose a failed waterproofing membrane for repairs can be prohibitively expensive and in some cases impossible. For this reason, many designers are choosing to specify integrity testing to verify that the waterproofing membrane is free of discontinuities and penetrations through the membrane prior to the installation being permanently covered. When integrity testing is not specified, many contractors are often performing this type of testing voluntarily to avoid future problems or “call-backs.”

The most common integrity testing method is the flood test. Flood testing is typically performed by flooding waterproofed horizontal surfaces with at least two inches (50 mm) of water for a period of up to 48 hours. Temporary dams are often constructed to partition the test areas, provide an up-turned plaza edge and control the depth of the flood testing. During the flood test, access to the underside of the flooded areas is necessary for a visual inspection of water leakage. However, in the case of a membrane failure (leak), flood testing indicates only where water is penetrating through the entire assembly within the test area, not the location above where water is breaching the membrane. In addition, flood testing cannot be performed on vertical surfaces or at locations where the underside of the slab is not accessible.

The aforementioned restrictions and lack of conclusive data associated with flood testing has enabled Electronic Leak Detection (ELD) to gain momentum as a viable alternative to traditional flood testing. This article will focus on the different types of ELD and the applications where ELD is or is not well-suited. 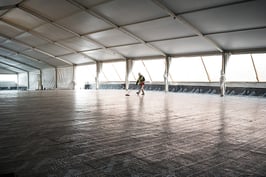 High Voltage Electronic Leak Detection (HVELD) can be performed on vertical or horizontal surfaces under dry conditions. The principle of the HVELD process involves a generator that delivers an adjustable stabilized direct current (DC) output voltage for the detection of breaches to the electrically insulated roof or waterproofing membrane.

The generator emits a calibrated voltage discharge which conducts through membrane penetrations to a grounded earth lead, such as a metal drain body or steel reinforcing embedded in the concrete slab. Should the current make contact with the ground, this will complete the circuit emitted by the generator. An audible beep from the test equipment alerts the technician of the breach. Small sparks can sometimes be seen or heard when a breach location is contacted by the probe.

The initial test voltage is based on the thickness of the waterproofing membrane and is verified (calibrated) by creating a sample breach in a typical section of membrane being tested to ensure detection levels are appropriate. In the case of liquid applied membranes, properly calibrated HVELD equipment can also detect locations where the membrane does not meet the minimum thickness requirements, even if no breach is present.

Multiple false positives are possible with this type of testing if the equipment is not properly calibrated for project specific materials. Due to the high voltage, testing should not be performed in inclement weather or in wet or moist conditions for the safety of the testing operator. HVELD is also not successful if the membrane is conductive, such as black ethylene propylene diene monomer (EPDM). 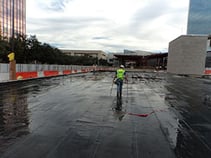 Low Voltage Electronic Leak Detection (LVELD) is performed on horizontal surfaces using water as a conductive medium on the surface of the waterproofing membrane. Multiple types of LVELD testing equipment and setups are available. The principle of the LVELD process involves a perimeter conductor loop placed on the surface of the membrane. The conductor loop is then connected to an electrical pulse generator. The generator is also connected to the grounded portion (e.g., reinforcing steel or a metal drain body) of the substrate below the membrane.

During LVELD testing, the top surface of the membrane is lightly wetted. The thin layer of moisture creates a continuous surface plane of electrical current within the established perimeter conductor loop and allows the electrical pulse from the generator to pulse across the membrane. Once the generator is set up and activated, it sends a low voltage electrical pulse through the water on the surface of the membrane. Should any water make contact with the ground, this will complete the circuit emitted by the generator.  Because the electrical current is directional, the testing technician can use hand-held probes to determine the direction of the current flow and follow the flow until the breach is located.

In addition, all known breaches and items that are in contact with the grounded substrate should be isolated from the test area during testing with a separate perimeter conductor loop. This includes drains, metal pipe penetrations, fasteners and so on.

Compact LVELD testing units are also available. The compact units feature a portable perimeter conductor loop and series of probes that are moved across the top surface of the membrane. Similar to the scenario described earlier, the portable perimeter loop is energized and the probes are used to detect discontinuities in the membrane. With this test equipment, it is necessary to lightly wet the surface of the membrane during testing, but it is not necessary to set-up a perimeter conductor loop or to isolate grounded items.

LVELD testing is good for testing the unobstructed field of a waterproofing membrane, and large quantities of membrane may be tested in a short period of time. However, this method is less effective at testing vertical flashings, material transitions and around drains, as these conditions are typically isolated from the test area as a result of being grounded or due to the difficulty of keeping these surfaces continuously wet. Therefore, it is important to visually inspect these types of locations and/or perform isolated alternative testing. LVELD testing relies on the continuity of the water on the surface of the membrane to connect to the grounded substrate to identify breach locations. Breach locations where water has not yet reached the substrate can be missed. An example of this is often seen in the roofing industry when a vapor retarder is installed prior to the installation of the roof membrane. Water may breach the membrane but is prevented from coming into contact with the substrate if the vapor retarder is not also breached in the same area.

Similar to HVELD, LVELD cannot be performed on conductive membranes or on membranes over non-conductive substrates; however, conductive substrates can be created (during construction) as previously discussed. Special precautions should be taken when testing some types of membranes, such as sheet membranes with high density polyethylene (HDPE) backing, to prevent water from beading up and providing a continuous layer of water across the surface of the membrane.

An engineering consulting firm was contacted by a general contractor who was charged with constructing a university sports stadium on a tight schedule. The contractor was concerned about maintaining the integrity of the waterproofing membrane as the project schedule required a specially formulated waterproofing membrane to be installed shortly after each concrete pour (24 hours). As a result of the restrictive schedule, testing was required to occur on specific dates and times in both wet and dry site conditions. To accommodate the stringent timeline set forth and varying site conditions, both HVELD and LVELD were performed. HVELD testing was completed in the dry locations, and LVELD testing was performed in wet locations. The consulting firm was contracted to identify any breaches or material deficiencies and retest repair areas completed by the waterproofing contractor the same day.

Testing of a 15,000 square foot (1395 m2) area was completed over the course of eight mobilizations. During testing, the consulting firm detected an excessive number of pinhole breaches in the installation of the membrane on vertical surfaces. Some of the breaches were large enough to be visually observed without ELD, while others were much smaller (approximately the size of a pencil tip) and required the use of ELD for detection. It was determined that the cause of the pinholes on the vertical surfaces was due to the irregular surface of the formed concrete substrate. To correct this deficiency at locations where the waterproofing membrane had already been installed, an expensive and time consuming retroactive application of repair sealant was applied on the waterproofed vertical surfaces. Once the sealant had cured, the vertical areas were retested using ELD and confirmed to be watertight. To prevent similar pinholing at future locations, a pre-treatment of the concrete surface with extra waterproofing material or repair sealant was implemented to create a smooth surface for the waterproofing application.

In addition to pinholes, a material thickness deficiency at the transition from vertical to horizontal surfaces was detected utilizing ELD during the first two (of eight) testing zones. This information was relayed to the waterproofing contractor, and a thicker application was installed in these and the remaining zones.

Breaches in the field of the membrane were identified with ELD, repaired and retested during each of the eight mobilizations. Breaches were up to approximately 1/16 inch (1.6 mm) in diameter.  In some cases the breaches were detected at locations where a protection board had already been installed. The contractors were able to expose the breaches (where covered) and patch the waterproofing membrane while testing was ongoing at other locations. The repaired areas were retested prior to leaving the site.

As with most things, there is not a “one-size-fits-all” testing method. The unique project-specific conditions should be carefully evaluated to determine the most appropriate integrity testing method. If it suits the project, ELD is a rapid and precise testing method to ensure a quality waterproofing application has been installed before it is covered. ELD is gaining popularity in the roofing and waterproofing industry for its ability to minimize the risk of costly repairs to damaged materials from construction activity or deficient installation after construction has been completed. Like any type of specialized testing, proper training of the testing technicians and engineers is critical to ensure reliable results. Due to the complexity and variety of construction today, it is important that the technicians and engineers understand the principles of the testing procedures so adjustments can be made for unique field conditions.

Danielle M. Czyzewski, PE, REWC, is a Project Manager with Pie Consulting & Engineering in McKinney, Texas. She received her bachelor’s degree in architectural engineering from The University of Texas at Austin. Danielle has more than 10 years of experience in the investigation, analysis and repair of residential, commercial and mixed-use facilities, with a focus on building enclosures. She is an active member of RCI and is currently serving as the president for ICRI’s North Texas Chapter. 866-552-5246 dczyzewski@pieglobal.comwww.pieglobal.com

Carole A. Cummings, BECxP, CxA+BE, is a Project Manager, Building Science Group, with Pie Consulting & Engineering in Arvada, Colorado. She received her bachelor’s degree in architectural engineering from The University of Texas at Austin. Carole has more than 10 years of experience specializing in repair and rehabilitation design, historic preservation, water infiltration and investigation, building envelope assessments and litigation consulting.