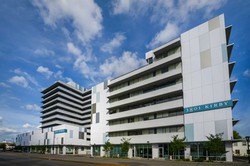 There are many things for an owner to consider and calculate when redeveloping a real estate asset. Should it be torn down for something sleek and new? Should it be renovated or possibly repurposed? One client was considering those same options with their Art Deco 1960s office development that was significantly lacking curb appeal. Removing it altogether and building something new was definitely on the table; however, taking into consideration its location, architectural significance and market potential, demolition was not the most desirable or economical alternative.

3701 Kirby, a 12-story office building and 3801 Kirby, which is seven stories, are located in Houston’s Greenway Plaza district just north of Interstate 59. Many tenants hang their hat here including oil and gas companies, law offices and design and architectural shops. It is also the home to Baylor College of Medicine who operates a clinic at this location. Instead of tearing the two buildings down, the owners chose to give them a multi-million dollar face-lift that includes a new exterior skin and rooftop amenity decks, one with a putting green. 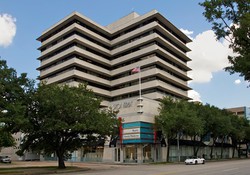 Due to a long, proven track record and positive working relationship, Chamberlin was called upon by general contractor, JE Dunn, and building owner, The Appelt Company, to provide roofing and waterproofing services to update the two buildings while they were fully occupied.

“The renovation of occupied buildings like these is nearly always more challenging than a grass roots project as it relates to the structure’s unknowns and the task of working around occupants,” said Jeff Persyn, Vice President of The Appelt Company. “Chamberlin’s breadth of project and trade experience and knowledge of building systems of all kinds appeared, from my perspective, to be invaluable when overcoming these challenges.”

Eyebrows get a lift
One of the challenges on this project was to install 117,000 square feet of waterproof coating to the top and underside of the buildings’ horizontal eyebrows on each elevation to provide an aesthetic appearance and preserve the concrete from deterioration. 3701 Kirby consisted of nine floors with five foot wide eyebrows extending out from each level and 3801 had seven floors with a similar exterior. Developing the most effective work access to the eyebrows was very important for safety and efficient production. 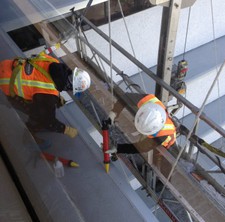 Innovative Solutions
Different work area access ideas were considered, such as working directly from the concrete eyebrows on each level. In order to access the eyebrows, there was one entry ladder on the side of the property that extended from the ground to the top level, which was the only way to access each floor. If this was the process chosen, Chamberlin would have to climb the ladder with materials to the designated level and walk around the entire building as they install the coating. Once complete on that level, they would have to walk back around the building, with materials, to the ladder, in order to climb to the next designated area. This posed a safety concern with installers working on a narrow concrete eyebrow while carrying material around on the ledges.

At the start of the project, Chamberlin’s operations team, including field supervision, met extensively to plan how the work would be performed safely and on time. In order to access the eyebrows safely, Chamberlin proposed using swing stages with a slide out porch that would help with installation at the underside of the eyebrow. This option was accepted by the general contractor and utilized throughout the entire project. Once the installation of the coating was complete, Chamberlin installed 9,400 linear feet of sheet metal trim at the edge of the eyebrows to finish it off.

When the work began, the production rates did not reach what was initially estimated. After monitoring production and meeting to discuss the most efficient way to obtain the required rates, Chamberlin made modifications in the swing stage lengths as well as changing a few sequences in the installation steps which helped to meet the required production rates and finish the work on time. 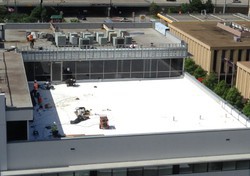 Preparation for Amenity Deck
Another challenging and unique aspect of this project was the roof replacement on 3801 Kirby. Chamberlin was asked to tear off the modified bitumen roof system that was currently in place in order to provide structural steel reinforcement on the concrete deck to support the new paver installation. Chamberlin removed the roof system then immediately installed a temporary membrane to protect the building occupants underneath. Subcontractors then came in to put the structural steel “I” beams in place.

In order to install the steel, each piece was laid out in the desired location and holes were drilled in the concrete as stud anchors. The beams were put into place, then Chamberlin waterproofed each stud penetration in the temporary membrane. Chamberlin infilled ISO insulation between the beams that was then followed by the installation of a wood deck. Though this is not a typical roofing process, Chamberlin installed a single-ply TPO roof system over the wood decking as it was being installed to create a water tight assembly. Once Chamberlin was finished with the roof installation, a protection mat was put into place and pavers were installed along with the putting green, making the roof deck a beautiful amenity for the tenants.

“Chamberlin’s performance on this project was excellent,” said Persyn. “What I have come to expect from their company when working with them on and off for the past 17 years - high-quality workmanship, timely execution, and safely done not only for the workers but the occupants of our buildings. There has not been one warranty call to date related to Chamberlin’s work on this project.”