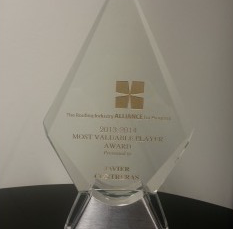 The Roofing Industry Alliance for Progress’ Most Valuable Player (MVP) Award program identifies and honors workers across the United States for their exceptional achievements and contributions to the roofing industry. Chamberlin Roofing and Sheet Metal Foreman, Javier Contreras, was recognized as MVP for 2014. Javier’s dedication to safety, quality and teamwork, along with his forethought and attention to detail, are noteworthy qualities that make him one of the best in the business.

Javier Contreras, Chamberlin Roofing and Waterproofing Foreman, is one of our hardest working employees. Safety, Quality and Teamwork are values by which we measure successful work at Chamberlin, and he truly upholds all three on each and every job he undertakes. He is an efficient roofer who is always willing to go the extra mile. His work ethic and attitude are outstanding. Javier takes pride in all of his work, whether it is a re-roof or filling out a report correctly. His drive for precision and accuracy in everything he does sets him apart from the rest. His managers value him and appreciate his notable contribution to the Chamberlin team. He motivates his crew and others around him to follow in his impressive footsteps. Javier’s crew has been together for 10 years, with the last four spent at Chamberlin. We believe Javier shows MVP qualities in outstanding on-the-job performance in his forethought, quality work, roofing knowledge and pride in his work.

One of Javier’s most outstanding qualities as a roofer is his forethought. He is constantly double-checking the specifications, analyzing the job and looking ahead to what is immediately in front of him and down the road. This is an invaluable asset to his crew, Chamberlin and the general contractor for any project we work on. He has caught many oversights that would have cost everyone time and money in the future, if not discovered when they were. One example of his conscientiousness was displayed on the re-roof of One City Place in Fort Worth, TX. Chamberlin’s scope included removing the existing foam roof and installing a new 60 mil TPO single ply roof. From studying the plans before work began, Javier discovered the wood blocking at the peremiter edge of the roof was going to be at a higher elevation than the finnished roof. Due to the fact that the roof has no parapet wall, the wood blocking must be flush with the finished roof elevation so the edge metal will fit correcctly and be able to be stripped in per the manufacturers details. We were able to alert the General Contractor on the project, and they figured out a solution prior to job start up. If this hadn’t been caught before the new roof was installed, we would have been faced with pulling the new roof off the wood blocking at perimeter to remove some of the height and then re-attching the roof membrane to the blocking, with little time or money left at that point to do so. Becasue of Javier’s keen observation, the crew removed two inches of wood height from around the roof’s edge in the beginning and the project was completed watertight, on time and on budget.

In addition, Javier often helps find solutions to the issues he detects. A windscreen wall was necessary for Chamberlin’s 256,000 square foot re-roof of the Xerox building in Lewisville, TX. While the general contractor included the windscreen in the plans, how to attach it to the roof was yet to be determined. Javier quickly developed a J-bolt that would attached around the roofing joists to hold the wind screen supports, and the project could move forward as planned. The windscreen met uplift and roofing warranty requirements and was secure for the duration of the project. In addition to having this advantageous forethought, he is great at communicating his discoveries to our Project Managers and the general contractor, helping everyone on the project work together. Further lending to this communal relationship, Javier excels in keeping everyone on the project informed of how the work is progressing and projecting accurate completion dates. Javier’s effort to catch mistakes before they happen speaks volumes to his work ethic and his dedication to getting a job done right, on time and on budget.