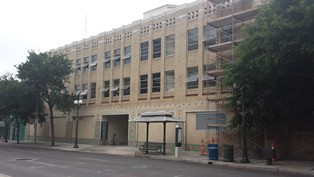 Similar to most buildings in downtown San Antonio, the Homewood Suites has history dating back to the late 1800s and is a reflection of south Texas’ culture. Also owned by the hotel is another building that maintains the same historic façade; a four-story parking garage which serves their guests and downtown visitors. This historic structure was once a Montgomery Ward’s department store, and was renovated into a parking garage in the 1970s. Over the years, the garage has reached a state of disrepair with leaks occurring throughout.

In order to restore the deteriorating structure, general contractor, Swinerton Builders, began to complete several portions of renovations and called upon Chamberlin to help make it watertight. Chamberlin’s scope of work included traffic coating the entire upper deck to make it reusable as a parking area, installing elastomeric coating on parapet walls and below-grade waterproofing in the basement.

Due to the severe leaks and worsening condition of the structure, the scope was found to be more challenging than initially thought. Chamberlin assessed the current state of the garage to determine the most effective way to complete the task at hand and developed a plan to execute the job with a high quality waterproofing installation in mind for the renovation. 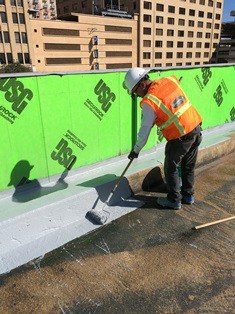 Chamberlin began their work in October of 2014 by tearing off 13,000 square feet of existing built-up roof system on the upper deck. Because tar has the ability to soak into concrete and can become hard to remove, a shot blasting crew was brought in to remove the residue that was left behind. As the shot blasting was taking place, it became apparent the concrete was too soft to continue and was making the removal process more difficult.

“The original plan to shot blast the roof did not work and forced Chamberlin to take a different approach,” said Swinerton Superintendent, Kalen Keach. Chamberlin abandoned the shot blasting and, after re-evaluating the situation, decided to scarify the rest of the residue. “Ultimately, they found a solution, were able to install the new traffic coating, and it looks great,” said Keach.

After tearing off the roof system there were loads of roofing materials to be removed. Chamberlin utilized a small skid loader that was able to quickly haul trash from the upper deck level to the dumpster on level one. Each crew member received on-the-job training from Chamberlin’s Safety Coordinator to become equipment certified. When traveling down the garage ramps to remove the trash, the skid loader had to be driven backward because of the incline and weight of the loader’s bucket. Flaggers were required in order to direct any traffic that may be coming up the ramps because the garage was still in use during construction on the first and second levels. 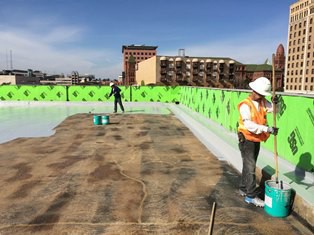 Although scarifying the concrete helped to remove the old roof, it also caused the surface to become uneven leaving gouges in the concrete. To overcome this issue, Chamberlin routed all of the cracks on the surface followed by applying a polyurethane sealant. As soon as the gaps were filled, a combination of epoxy primer and sand was utilized to level out the area before applying another coat of primer followed by a base coat. During the application of these coats, sand was broadcast in order to increase traction for the vehicles. In the drive lanes, Chamberlin applied two intermediate coats and broadcast the sand heavier since those areas take the most abuse from vehicles.

In order to keep production at a steady pace during the installation of traffic coating, Chamberlin crew members wore metal baseball cleats instead of the typical equipment that straps on the shoe. Not only did wearing the cleats make it easier to do the work, it was also more comfortable for the crew members. That’s a win-win!

To further ensure the structure was water tight, Chamberlin sealed all of the joints on the inside and outside corners on the parapet walls with two coats of urethane caulk, which tied in to the waterproofing system installed on the three foot high parapet walls surrounding entire roof perimeter. In the basement of the parking garage, existing framed walls were removed and replaced with brick. Chamberlin completed the system by applying a bentonite waterproofing over the existing brick in three locations.

“Chamberlin has done an outstanding job and has consistently taken care of our needs no matter how large or small the problem,” said Keach, regarding the renovation work at the Homewood Suites parking garage. “I look forward to working with Chamberlin in the future.”