A View From the Top 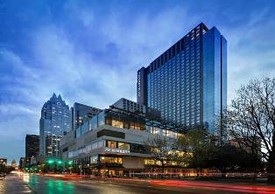 Construction in Austin, Texas has been booming for the last several years, but few buildings have been more impressive or anticipated than the JW Marriott Hotel and Conference Center. This luxury hotel sits atop a three-level parking garage, has more than 1,000 guest rooms and has attained LEED Silver certification and a two-star Austin Energy Green Building rating.

In October of 2012, groundbreaking took place on the 1.2 million square foot hotel making it the largest JW Marriott in North America. With many anticipating its arrival, more than 520,000 room nights were reserved through 2021 before its official grand opening in February of this year. The general contractor on this 34-story hotel, a joint venture between Hunt Construction Group and Hardin Construction, chose Chamberlin to provide multiple services in order to bring this new landmark to the city.

From the Ground Up 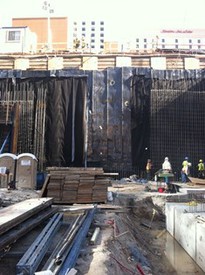 Chamberlin started work on the project by performing their waterproofing scope on the underground parking garage. In order to prepare for the garage, a hole was dug five stories into the ground and wood lagging, or a barrier wall, was put into place on the interior to protect workers. Due to the hole being so deep, there were areas at the lowest points in the excavation where ground water would surface. It was a challenge to continuously pump out water while simultaneously prepping for waterproofing installation.

Pool Plaza Amenity Deck
On the level five pool plaza amenity deck, Chamberlin installed an air barrier membrane and hot-applied waterproofing in order to dry in the building to allow interior finish out on level four. Usually, once the plaza deck waterproofing is installed, it is immediately covered. In this case, work was still being done, and the pavers could not be installed until the entire project was complete. A UV protection board was applied in order to protect the waterproofing from the sun and ongoing construction until the pavers could be installed at a later date. 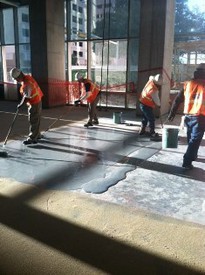 The method in which the pool and planters were designed made it challenging to install the hot-applied waterproofing in some areas. Some of the planters had structural walls that were six feet tall. On one particular planter located on the outside of the pool, the workers used a ladder to get down and inside with only two-and-a-half feet of room to work. Other Chamberlin crew members prepared and heated the material on the upper level, then lowered the hot-applied to the crew members waiting to install it.

“This was done one bucket at a time and required the utmost safety precautions to carefully transport the 375-degree material,” said Chamberlin General Superintendent Dave Edwards.

Joint Sealants
Chamberlin also applied 60,000 linear feet of double seam joint sealants to the Marriott. Because the hotel is so tall, Chamberlin caulked the lower third of the building in order to dry it in for the work taking place on the interior. The challenge was going around the building on several swing stages with four different trades, multiple times. Simultaneously, the framing was put up, windows were installed then Chamberlin would caulk the windows and façade.

Another challenging scope was applying pedestrian traffic coating on the concrete, decorative canopy that sits 35 feet above the mechanical penthouse on the 34th floor. The structure and design of the canopy made the installation quite a challenge, as Chamberlin had never worked on anything like it before. The safety departments of Chamberlin and the general contractor worked together to come up with a plan that would best work in the situation. A specialized horizontal life line and yoyo system was installed requiring the workers to be tied off at all times.

Chamberlin was also contracted to install a below-grade cementitious coating inside the underground sedimentation tank. Before this work could take place, Chamberlin crew members received specialized confined space safety training. Since the cementitious coating installation was completed inside confined conditions, Chamberlin was required to use a tripod safety device, air monitoring equipment and a pump to regulate fresh air. The tripod device sits above the confined space area requiring crew members to wear a harness, so in case there is a life-threatening emergency, they can attach their harness to the life line cable connected to the tripod and be pulled out of the hole by the site monitor.

“Although the work executed at the JW Marriott was in Chamberlin’s wheelhouse, two of the scope items required significant pre-planning prior to execution,” said Patrick Halaszyn, Chamberlin Waterproofing Operations Manager. “The coating in the sedimentation tank and the traffic coating on the canopy required full-time safety personnel on site during installation. We completed this work as planned – safely and with zero incidents.”

Chamberlin also applied traffic coating to multiple mechanical rooms spread out on several different levels as well as in the parking garage and penthouse. Coordinating with other job-site trades was challenging and important because certain work had to follow a specific sequence. In rooms that contained a generator, Chamberlin installed the traffic coating before the generator was lifted into place and walls were then built around it.

Once all of the work was complete and the hotel was applying its final touches, Chamberlin returned to the hot-applied waterproofing on the pool plaza amenity deck and installed 10,000 square feet of pavers. After all was said and done, Chamberlin was able to finish the scope a few hours before the building was handed over to the owner just in time for its official grand opening.