What is a wet seal? An Australian-based clothing company or a drenched sea mammal? A “wet seal” as it relates to the building envelope industry is generally referred to as the application of an elastomeric, gun-grade joint sealant at the interface of a glass unit and the adjoining frame and/or gasket of an existing window unit. “Wet seal” is not officially defined in ASTM C 717, “Standard Terminology of Building Seals and Sealants.” According to the Sealant and Waterproofing Restoration Institute (SWRI), a wet seal is commonly referred to as a cap bead application. The primary function of a wet seal is to alleviate water infiltration occurring within a window assembly. The window assembly subject to receiving wet sealing can be an individual punched opening, a storefront system, a structural skylight or a multitude of window wall/curtainwall systems.

Water infiltration can occur within window assemblies for a variety of reasons including, but not limited to, the following:

• Improper installation of the assembly
• A lack of or inadequate/improper end dams
• Loose, missing or unsealed fasteners within the assembly
• Unsealed joints
• Deteriorated or improperly installed gaskets

Leaks can also appear to be associated with window assemblies, but the actual source of water penetration through the building envelope and the manifestation at the windows is the result of a nonfunctioning through-wall flashing system located directly above the top or head of the assembly. Since the components of a window are typically concealed or restrained within the frame, disassembling of the units (or portions thereof) is often required to perform corrective procedures to alleviate the water infiltration problems that are directly related to issues associated with the window unit. While this can be accomplished, the work is meticulous, time-consuming, relatively costly and can be disruptive to building operations. Some units that utilize snap-on covers can be disassembled to perform remedial work without glass removal. However, this removal process could distort the covers and result in an improper fit during the reinstallation process. Other assemblies, such as lock-strip gasketed systems, typically cannot be disassembled without the removal of the glass. So, with the need to resolve water infiltration problems, together with the desire to minimize disruptions to building occupants and operations, as well as restrictions from budgetary constraints, wet sealing is commonly utilized to solve water infiltration problems.

When water infiltration is experienced in window/wall systems, it is often believed that the internal gutters and weep system (collection and extrication system) are not functioning properly. Therefore, the intent of a wet seal is to “seal” all of the possible/potential sources on the exterior surfaces of the window assembly that may be sources of water infiltration. These potential sources could include the following

• Intersection of the glass and the preformed gasket
• Intersection of the frame and the preformed gasket
• Exposed fasteners in the frames
• Exposed joints (butt or lap joints) in the frames or caps/covers that are not utilized as a weep system
Consequently, the sealant in a wet seal application becomes the primary seal and the backup system within the assembly is basically abandoned. 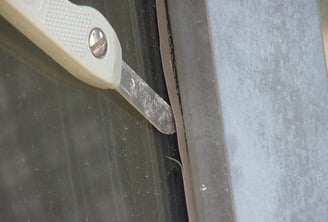 As a result of these actions, a relatively large gap (¼ inch to ½ inch) can occur at the corners of the sill and jamb intersections, which can allow an excessive amount of water to migrate into the internal network of the assembly (Figure 1). The gaskets are traditionally composed of EPDM rubber that, upon exposure and aging, will begin to shrink and develop crazing/cracking of the gasket surface. This shrinkage and development of cracks (particularly along the outer, thinner edges of the gasket) can result in a loss of compression between the gasket and the glass, which can then allow moisture migration into the assembly (Figure 2). Therefore, the purpose of the wet seal is to completely conceal the gasket with the new sealant.
This can be achieved by placing either bond breaker tape or a ¼-round backer rod over the exposed top edge of the gasket and then applying the new sealant in a fillet-shaped joint configuration (Figure 3). After the sealant is “gunned” in place, the sealant is tooled to achieve bond interfaces (“bite”) with both the glass and the frame. The bond breaker tape (typically a polyethylene strip/ribbon) or the backer rod serves two purposes:

The bond breaker tape (typically a polyethylene strip/ribbon) or the backer rod serves two purposes:
1) Results in an unbonded portion of the bottom of the sealant to achieve a profile similar to the desired “hourglass” shape for optimum sealant performance
2) Protects/separates the sealant from the gasket to alleviate potential compatibility issues between the sealant and the gasket

Since the existing gaskets in window systems are predominantly black in color, a black-colored sealant is commonly used for this application. A silicone-based sealant is typically used for wet sealing due to its propensity for achieving long-term bonds with both glass and metal substrates. At exposed fasteners in the assembly, sealant is applied in a cap-bead configuration that conceals the fastener in its entirety. A cap-bead profile, or bridge-sealant joint, is also applied over exposed joints in the metal frames and/or covers of the assembly.

The cap bead is centered over the joint and can be applied directly to the metal frame. If movement is expected at this joint, a thin strip of bond-breaker tape (polyethylene) may be loose-laid over the joint prior to the sealant application, again attempting to mimic or achieve parallel bonded ends of the sealant. Silicone sealant is also typically used for this application. Sealant applied over joints in the frames will commonly intersect or abut sealant that is applied between the metal frame and the exterior facade finish. Therefore, sealant compatibility between various sealants that occur in these joints should be confirmed. However, when wet sealing is performed, the sealants located around perimeters of the frame are also typically replaced, as these sealants are commonly the same age as the gaskets and are weathered and deteriorated. This also allows the proper sealant selection for all of the affected joints. Surface preparation, cleaning and priming are essential in achieving proper sealant performance with this application (Figure 4). 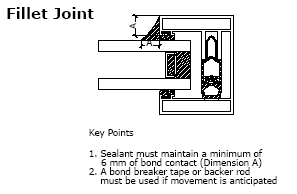 Similar to other preformed gasket systems, lock-strip gasketed systems become vulnerable as the outer edge of the gasket or lip of the gasket loses pressure on the glass, resulting in avenues for moisture migration into the glazing pocket and manifesting as leakage in the interior at joints in the gaskets. Wet sealing of these assemblies can include injecting sealant behind the lip of the gasket and allowing the sealant to exude out to be tooled flush. Sealant is then applied in a cap bead centered over the lip or outer edge of the gasket and adhered to the gasket and the glass (Figure 5). Sealant is also applied over the gasket intersections at the corners of the four glass units, and any gasket joint that may occur in vertical or horizontal runs of the assembly (Figures 6 and 7). Mock-ups using the proposed sealant should be performed to test for compatibility issues and adhesion properties. In the past, polyurethane sealants were commonly used for this application, due to their ability to bond readily to the gaskets. However, due to their organic-based compound, this type of sealant weathered and became hardened in a relatively short timeframe (i.e., 5-7 years) and made future sealant remedial work (removal) more exhaustive.

Additionally, polyurethane sealants are typically not designed for achieving high performance when adhered to glass substrates. Improvements in the silicone sealant technology in achieving good adhesion to rubber gasket, combined with its historic ability to bond to glass have allowed silicone sealants to be effectively used for this purpose. Silicone sealants have a proven track record for long-term performance and, in certain cases, a warranty (material and installation) can be issued by the manufacturer for the sealant application.
In summary, wet sealing can be a valid and cost-effective method for alleviating certain water infiltration problems associated with window systems and assemblies. However, as with most sealant applications, assembling mock-ups and collecting pre-job adhesion testing are essential in achieving optimum results. In addition, it is recommended that the sealant manufacturer be involved in the planning phase of the project and buy-in or approve of the application. 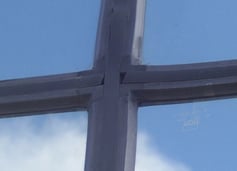 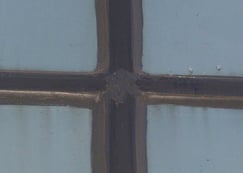 This article is republished with permission from RCI Interface. See the original article here: http://rci-online.org/wp-content/uploads/2008-08-schaack.pdf

Karl A. Schaack, RRC, PE, is president of Price Consulting, Inc., a roofing and waterproofing consulting firm in Houston, Texas. Schaack has a bachelor’s degree in civil engineering from Clemson University. He is a registered Professional Engineer in Texas, South Carolina and North Carolina. Karl is a member of RCI, the Roofing Contractors Association of Texas and the Gulf Coast Chapter of RCI. He is a Registered Roof Consultant (RRC) and a former director of RCI’s original Region IV. In 2007, he won the Horowitz Award for besttechnical article in RCI Interface for 2006.