Oral Roberts University (ORU) is a charismatic Christian university founded by evangelist, Oral Roberts, in 1963. Based in Tulsa, Oklahoma, the university has an enrollment of over 3,500 students and offers more than 65 undergraduate programs.

In 1981, Oral Roberts developed several buildings just south of ORU’s main campus to make up the City of Faith Medical and Research Center. The campus consists of three buildings: a 60 story clinic, a 30 story hospital and a 20 story research center. In 1989 the City of Faith Medical and Research Center closed because of financial problems and lack of demand for medical services. Today, the facility is known as CityPlex Towers. It is owned by Oral Roberts University and is now mostly leased as commercial and medical office space.

In August of 2008, as part of a complete renovation project, Chamberlin was hired by Oral Roberts University to replace the roofs on the CityPlex Towers. The scope of work included the three tower roofs, a large base building, roof and five canopies.

City on a Hill

The design of the 2.2 million square foot complex is quite unique. Though they are not located in Tulsa’s central business district, the buildings are an architectural landmark that boasts the second tallest building in Tulsa’s skyline. Each building is triangular in shape with a golden facade and is joined together at the fifth floor by a large base structure. The base building is a spacious complex with three auditoriums, a fitness center, cafeteria, food court, convenience store and catering services among other amenities. The 60 story tower, which is the tallest of the three, is not only used for medical and office space but it also houses high power radio antennas on the roof. These antennas broadcast a local radio station and are active 90 percent of the time. 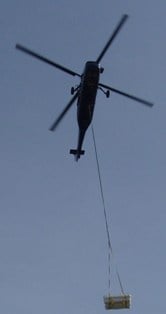 Like most renovation projects there were a few construction challenges. These challenges included multiple roof installations on varying high rise levels, inclement weather and the protection of personnel from potentially harmful radio frequencies.

Chamberlin’s scope on ORU was to install a TPO adhered roofing system on all the roofs as well as canopies. One of the biggest challenges was hoisting and transporting roofing materials. With multiple crews and elevators that were not accessible, the only option for the team seemed to be hand carrying materials through occupied offices up to the appropriate roof levels. After much consideration, Chamberlin instead chose to utilize a helicopter service to deliver materials to the roofs, which saved the team precious time on the project.

High wind conditions and harsh winter weather occurring during the peak time of the project made it extremely difficult to keep the job running. At any given time, the wind could be two to three times greater on any roof level than on the ground, so Chamberlin crews had to be extremely careful to secure all materials and equipment even as they were performing the daily roof installation.

The FM broadcast radio station antennas located on the roof of the 60 story tower emit high-level radio frequency radiation. To protect personnel, Radio Frequency Clothing was required to be worn at all times by Chamberlin roofers and supervisors who worked on this particular roof. These special suits prevented Chamberlin workers from being exposed to potentially harmful radio waves while they installed the TPO roofing. Additionally, Site Superintendent, Darrell Hordern, developed a schedule for the workers which kept track of the amount of time each person spent on top the roof next to the radio antennas.

When work wrapped up on Oral Roberts University CityPlex Towers in the summer of 2010, Chamberlin had successfully completed the $2,000,000 project in their given time frame, productively and accident-free. The owners are now working to market and lease available space in Oklahoma’s largest office center with much success.