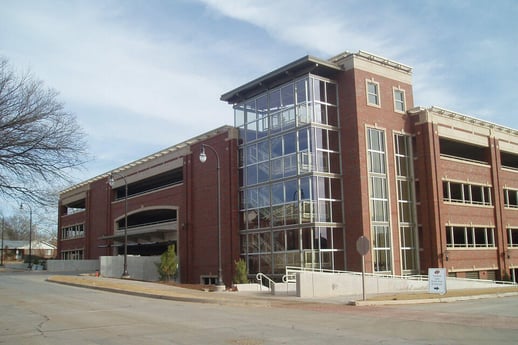 The Oklahoma State University (OSU) Monroe Street parking garage was first built in 2008. Located at the corner of Monroe Street and Hall of Fame Avenue, it is near the hub for the OSU transit system which allows students to easily get around campus and the City of Stillwater.

Chamberlin Roofing & Waterproofing was contracted during the original construction of this parking structure to perform waterproofing services. Nine years later, the natural movement of the garage caused by settling and other thermal and structural impacts resulted in cracks and spalling in the concrete. Sizable areas on the vertical walls and overhead were deteriorated and breaking off, causing possible safety hazards for pedestrians and vehicles. Extensive cracks in the slab were open to moisture, which in colder temperatures would freeze and further expound the problem by worsening the cracks and damaging more concrete.

The parking garage was in need of a renovation, and quick. The project was scheduled to take place during winter break while most students were not on campus. This allowed only two weeks for the four-story parking structure to be restored. Chamberlin was ready to step up to the plate and return to their old stomping grounds to work on the OSU Monroe Street parking garage once again. This time around Chamberlin performed concrete wall repair, beam and column repairs, embed repairs, slab crack sealing, joint sealant replacement and epoxy injections. 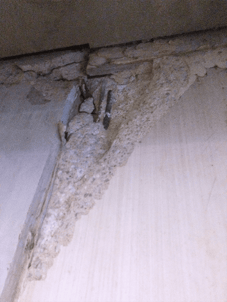 Sections of the garage walls, vertical beams and columns had severely deteriorated over time. The concrete was chipped, broken off and worn down to the rebar in some places. Using hand grinders, the Chamberlin crew first cut out the damaged areas in squares and removed the old concrete. Then, using a BASF grout, they filled in those areas bringing the grout flush with the existing concrete for a smooth finish. This not only improved the facility aesthetically, but also prevented the concrete in those damaged areas from continuing to crack and break off.

Steel support beams were embedded into the pony walls of the Monroe Street garage during original construction. Movement in the garage over time caused cracking and spalling around this embed. While routing the embed repairs, Chamberlin crew members discovered another concern. The rebar surrounding the damaged concrete in the walls was partially rusted. If left untreated, the rust will continue to spread and cover the rebar entirely. If that happens, the rebar could fail and cause structural damage to the pony walls.

To address this issue, the Chamberlin crew removed not only enough concrete to repair the damaged areas, but continued demolishing until all of the rusted rebar was exposed. They then removed the rust and applied a coat of rust inhibitor to the rebar before filling the areas back in, completing the embed repairs.

Sealant was used to repair the cracking in the concrete slab. Since the cracks were initially caused by structural shifting, the Chamberlin crew first cut the cracks open with a grinder to achieve the correct width-to-depth ratio for the sealant to have optimal movement in the future. Tremco Dymeric 240FC was chosen for this scope, which is a cost-effective urethane caulking useful for keeping moisture out without being too rigid. The same material was also well suited to replace the failed joints on the vertical precast panels.

With only two weeks to complete this project, Chamberlin tripled manpower and worked extra hours to meet the deadline. Timing was also a factor in material choice, and most of the materials chosen were rapid setting. Though many students were out of town for winter break, the garage was still in use and had a low volume of pedestrian and vehicular traffic.

The products applied needed to have quick cure times to avoid interference from dust, dirt and people. The concrete patching hardened enough in less than two hours to be secure, and the joint sealant material skinned over in just an hour. It would take a week for the joint sealants to fully cure, but in the mean time they were protected from the elements. The weather was fairly cold during this project, further complicating the already tight schedule. The ideal installation temperature for most of the products used is 60 to 75 degrees, so a fair amount of the work had to wait until it warmed up, usually after 10am.

Since the parking garage was in use during the renovation, careful coordination was required to flag off the areas where Chamberlin crews would be working ahead of time to ensure those parking spots remained unoccupied. The areas where they were actively working were coned off for their safety from vehicular traffic. Additionally, HEPA vacuums were attached to all grinding equipment. These devices suck the dust created from grinding the concrete into a vacuum before it can disperse in the air, protecting Chamberlin employees and pedestrians from inhaling it. Chamberlin crew members also wore a face shield and dust mask when grinding.

Chamberlin worked efficiently and safely to increase production and complete the restoration of the OSU Monroe Street parking garage within a tight time frame while keeping the parking structure open to the public.