Heights High School in Houston, Texas, is leak-free for the first time in 20 years thanks to Chamberlin.

This Magnet School of Computer Technology is one of three in HISD to offer an exclusive program that encourages creative, critical and reflective thinking while promoting skills for communication, interculutral understanding and global engagement. In addition to 20 Advanced Placement (AP) courses, this program helps prepare future leaders for further education and the workforce. The students receive hands-on training in one of four specialized academies to prepare them for careers in those fields.

For over 20 years, the basement, housing an ROTC classroom in the upper half and a mechanical space in the lower half, suffered severe water infiltration issues due to unknown causes. Chamberlin was employed to put a stop to the leaks and seal the basement watertight. The values and creed the ROTC program teaches its cadets prepare them for college and their future career. Without adequate classroom space, their learning environment was challenging, making these renovations extremely important to the growth and future of the Houston area.

The basement area was still in full use during the renovations, and the protection of not only the crew members but also students and teachers was a primary focus. During the school year, the crew could not work on the interior sections of the building since classes were still in session. They even had to limit noise while summer courses were in session. Chamberlin adjusted their schedule to work around school hours.

Keeping students on the busy campus out of construction zones and away from tools and machinery was a challenge in itself. Directional signage, fencing and locks were used to reroute students and faculty.

All equipment was inpected daily by a competent person before use. Personal protective equipment was worn at all times. Daily Job Hazard Analyses were completed, and weekly toolbox talks were held for the crew covering pertinent safety topics and reinforcing Chamberlin's safety policies and procedures.

Once on the job, Chamberlin discovered excessive water underground around the building reaching the top of the water table which was three to ten feet deep. The water table separates the groundwater zone that lies below it from the capillary fringe that lies above it. It was unclear where the water was coming from, though it was clear this was the source of the water infiltration problems that had plagued the basement for years. Chamberlin was to install French drains around the school, apply positive side waterproofing to the exterior of the basement and perform a comprehensive urethane curtain grout injection from the interior side of the basement where excavation was not possible. A temporary dewatering system was installed to control the elevated levels of ground water and facilitate the waterproofing scope.

The building is over 100 years old and, during construction, the crew discovered gas lines and underground structures on the north side of the building that were not on the drawings they had received. With these gas lines, it was no longer safe to excavate that side of the building. An additional challenge was the unstable soil that would not allow H-piles to be installed deeply enough to safely secure a sheet pile shoring system to protect the excavation site. This prevented the installation of positive side waterproofing and the French drain that was planned on the side of the building. Instead, the chemical grout injection was performed from the interior side of the wall. 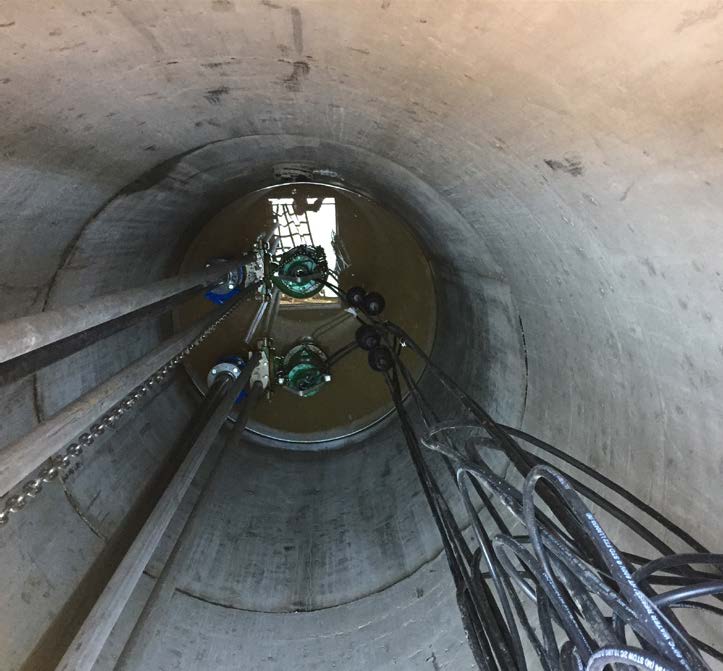 An exterior lift station was build to eject water from the French drain system. 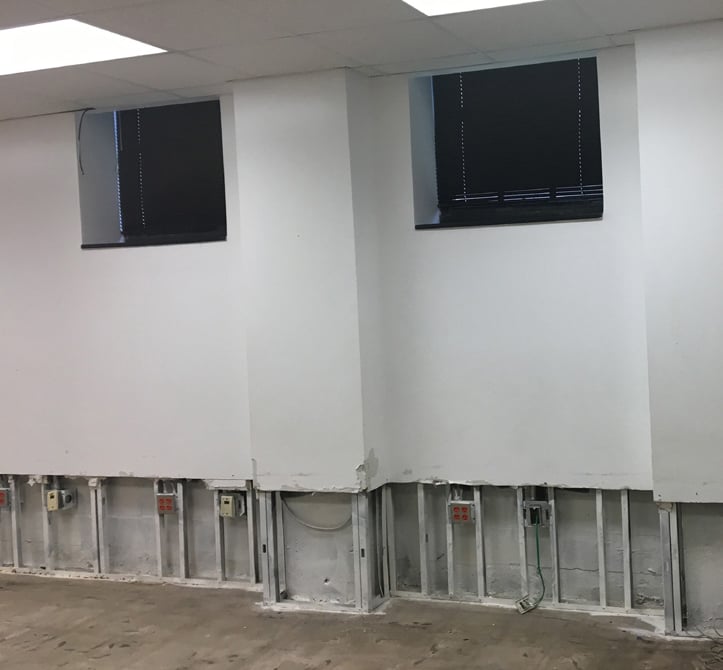 Chamberlin arrived to find bare stud frames and exposed conduit due to years of water damage to the drywall in the ROTC classroom.

A permanent dewatering system was designed to drain below-grade water to the city storm system.

Water damage had led to the bottom portion of drywall around the classroom being removed, exposing bare stud frames and electrical conduit. The next step was replacing this interior drywall and finishes. Finally, a permanent dewatering system was recommended for the school since the scope on the north side of the building could not be completed per the original design due to the unforeseen conditions. It took about eight months to develop this system, and it was installed in the summer of 2019.

Chamberlin's attention to detail and expertise gained from decades of roofing and waterproofing experience helped them deliver high-quality installations for this high school. The Heights High School project was a success, and the school is leak-free for the first time in more than 20 years.