Gaylord Family Oklahoma Memorial Stadium in Norman, Oklahoma, before and after renovation and leak remediation.

The Gaylord Family Oklahoma Memorial Stadium is one of the most well-known football stadiums in college football. With a total seating capacity of 82,112, the stadium ranks among the 15 largest on-campus facilities nationwide. For years, the stadium struggled with moisture intrusion, especially at expansion joint locations throughout the stadium bowl. Multiple unsuccessful attempts to retrofit and repair these conditions were made evolving into an annual maintenance item for the university and creating escalating repair costs.

Chamberlin was hired to find a permanent solution for the expansion joints and ultimately stop the leaks. Additionally, their scope for the stadium renovation included structural concrete repairs, crystalline waterproofing, epoxy injection, joint sealants, extending concrete steps for widened aisles and adding intermediate steps to the east side of the stadium. Chamberlin used carbon fiber reinforcement (FRP) to repair and reinforce support beams under the stadium allowing them to withstand more force to increase the lifespan of the stadium. The existing traffic coating on the north, west and east sides of the stadium bowl was prepped to receive an overlay traffic coating system in lieu of removing the entirety of the existing coating. Bentonite waterproofing was installed at the below grade walls where new concessions were built under the north end zone.

When installing liquid traffic coating, common issues caused by inconsistencies in membrane thickness are bubbling, blistering and elongation reduction which can ultimately result in material failure. Having been around the traffic coating block a time or two, Chamberlin crew members knew how to combat these potential mishaps. The coating thickness was checked with a mil gauge every 200 square feet during application to establish its consistency and confirm it met the manufacturer’s specifications.

Various methods can be utilized to test the integrity of structural concrete repairs after they are completed. At the stadium, Chamberlin chose to conduct a chain drag sounding test for this purpose. This sound test indicates if an area of the concrete patching is hollow. While dragging a chain across the repaired concrete, the noise will change from a clear ringing to a somewhat mute and hollow sound when passing over deficient concrete. Chamberlin’s test was successful and did not indicate any deficiencies. 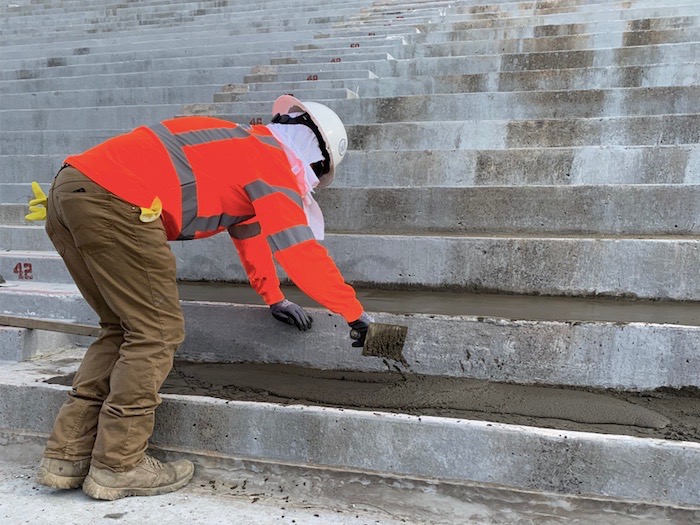 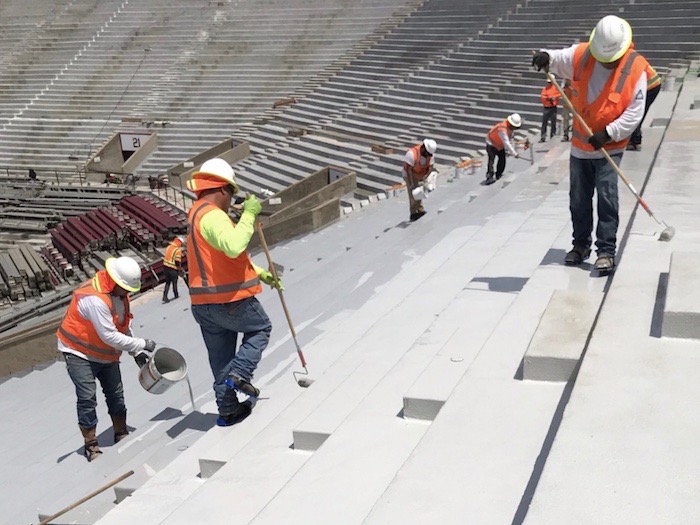 This was a very fast-paced project, as everything had to be completed within six months for OU’s first football game of the season. With the compressed schedule and anticipated weather delays, Chamberlin had to execute multiple scopes simultaneously and take a proactive approach to planning. An added challenge was the logistics of removing, storing, and reinstalling over 82,000 stadium seats around the traffic coating application.

Prior to job start, numerous discovery meetings were held to determine each trade’s needs. Chamberlin’s Project Manager Kraig Murray created a detailed schedule and phasing sequence for all trades on the project that determined who would work in what areas from day to day to maximize everyone’s time, avoid conflicts or slowdowns and prevent unnecessary damage to renovation finishes.

Once summer started, Chamberlin adjusted their start time from 7:00am to 4:00am. This not only protected the crew from heat-related illness but aided in the installation of the traffic coating. Installing traffic coating in high temperatures can cause outgassing which results in material bubbling that could ultimately lead to material failure. The stadium was not shut down for the renovations, which meant Chamberlin had to work around OU activities such as the spring football game and commencement. Chamberlin combatted imminent lost time due to this as well as expected weather delays by boosting manpower resulting in the project being completed on time.

One area in need of structural repair was the concrete blockouts that housed and supported the existing expansion joints. These blockouts required extensive repair for placement of the new joints. To begin, Chamberlin cut out the existing joints to complete the repairs. While this work was in progress, the open joints left the facility exposed to the elements. In case of rain, Chamberlin engineered a plan to quickly close the joints when needed and efficiently resume repairs when the rain passed. The solution was a sheet membrane waterproofing which was easily installed to seal the joints and swiftly cut away to allow quick access to the work afterward.

Chamberlin strengthened structural concrete beams underneath the stadium with carbon fiber reinforcement to stabilize it and prevent settling that could cause future damage to the structural integrity of the bowl. Access to this area was challenging as the beams were below the stadium bowl but above a sub-roof. Approximately 25-foot high scaffolding was needed but had to be constructed without compromising the sub-roof or the crew members’ safety. Since the sub-roof could not support the scaffold, a scaffold assembly was built up to rest on a tie beam. In addition, the traditional assembly of standard frames and braces would not fit in the area, so a modular scaffolding system with interlocking poles was erected.

Chamberlin was able to find a permanent solution for the expansion joint leaks, alleviating water intrusion issues and, in turn, costly maintenance upkeep for the university. Additionally, their project team offered alternative materials for the traffic coating and expansion joints that provided the owner improved performance and durability at no increased cost. Chamberlin’s proactive planning helped the scheduling and sequencing of all trades run smoothly and the project complete in just six months. The stadium was left rejuvenated and watertight by kickoff of the first football game of the season. 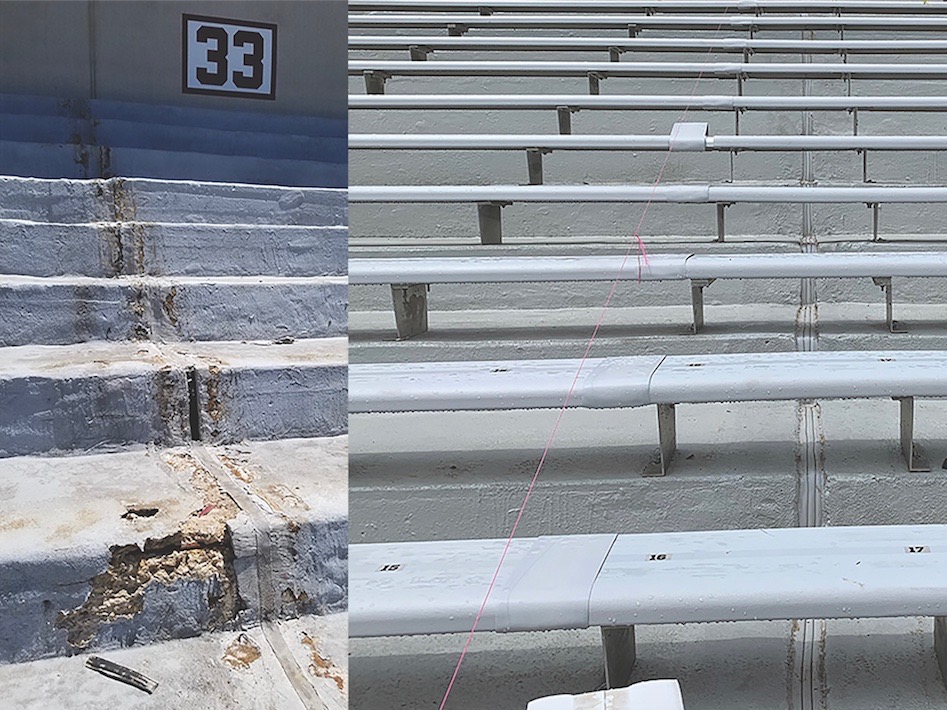