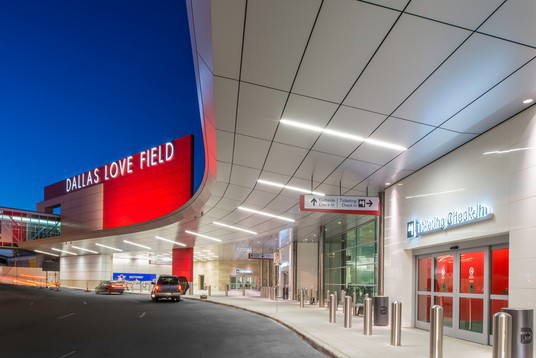 Dallas Love Field, a city-owned public airport in the heart of Dallas, Texas, serves seven million passengers a year providing a vital link for the economy of Dallas, the region and the nation. The airport has come a long way since it was established by the U.S. Army on October 19, 1917. Commissioned during World War I, when the top speed of even the fastest aircraft barely exceeded 100 miles per hour, the airport was little more than a grass landing strip. After more than 85 years in service, Love Field was designated as a Texas State Historical Site in 2003. Like all landmarks, it has a rich history and quite a few interesting facts surrounding it. It was at Love Field that Texan Lyndon B. Johnson took the oath of office on Air Force One following the assassination of President John F. Kennedy in 1963.

The airport greeted the 21st Century with the Love Field Modernization Program, the largest and most ambitious construction effort since its establishment. The airport was extensively renovated and expanded with a design that maintained the basics for which Love Field is known: passenger convenience, operational efficiency and maintainability.

The $519 million project involved a complete terminal renovation and expansion, the addition of new concourses, a larger baggage claim to accommodate future demand levels and a new ticketing wing to significantly cut down on lines. The new design, developed by Corgan Architects, incorporates tall ceilings and curtainwall, allowing for an abundance of natural light.

Chamberlin Roofing & Waterproofing was selected by General Contractor Hensel Phelps as the roofing contractor for this project. Chamberlin re-roofed the existing main terminal and installed a new roofing system on the expansion of the main terminal, new baggage claim, ticketing wing and concourses. In total, 450,000 square feet of a torch-applied Soprema two-ply modified bitumen roofing system was installed.

Chamberlin also installed a 45,000 square-foot GAF PVC roof on the main canopy at the airport entrance as well as a 40,000 square-foot Firestone TPO roof system on a roadway canopy. Chamberlin’s scope of work also included the installation of 12,000 lineal feet of Hickman aluminum coping on all of the roofs combined. A 10 man crew worked for four years to complete this tremendous project on time and with no safety incidents.

Dallas Love Field Airport remained fully functional throughout the duration of construction. Scheduling of the multiple trades working at the airport, delivery of materials and mobilization of materials had to be carefully coordinated. Due to airport traffic and safety concerns for pedestrians, accessibility to different roof areas changed often, sometimes daily. Chamberlin worked closely with Hensel Phelps to execute the project efficiently and safely. The general contractor set the schedule in phases, and Chamberlin met weekly with the project team to keep the project on track with the fluctuating schedule.

Time was of the essence in many areas that were roofed, and when an area became available for Chamberlin to work on, they had to move quickly. When re-roofing some areas, such as over boarding gates or TSA office, the crew only had a 24 to 48 hour time frame to tear off the roof and replace it. These areas could only be closed to passengers for that brief amount of time and were otherwise high traffic areas, so keeping them watertight was imperative. Chamberlin met this challenge with proactive communication, a clearly laid out installation plan and accelerated production, which sometimes included working overnight. Throughout the project, they completed their work on time, allowing the other trades that followed behind to begin their work, keeping production on schedule.

Security measures are high at this bustling airport. Several crew members had to complete the FAA badging process to gain access to restricted areas of the facility. These badges appointed them as escorts, and the rest of the crew had to be accompanied by an escort to get onsite.

Thinking Outside The Box

While installing the new roof system on the baggage claim facility, Chamberlin discovered an oversight in the construction of the building. The roof deck was not properly sloped for drainage. Instead, it was mostly flat in areas where it should be slanted to allow the water runoff to reach the drains. The result of some sloping and some flat areas created a wavy effect across the rooftop. One light rain immediately after this discovery confirmed that pooling water would be a huge issue on this roof. Chamberlin redesigned the roof installation on the spot to solve the issue without replacing the roof deck. After conferring with Hensel Phelps on the plan, they got started rectifying the situation.

To begin, the previously installed insulation was removed. Then Chamberlin began re-installing the insulation, adding extra to fill in the flat areas and raise them to meet the necessary slope of the roof. Some areas required up to two feet of additional insulation. Once the roof was leveled at the appropriate slope, Chamberlin proceeded with installing the two-ply Soprema modified bitumen roofing system. The finished product resulted in a roof that efficiently and effectively drains water. This was all done without interrupting the overall production schedule of the project.

Safety: Every Day, All The Time, No Excuses

For this project, Chamberlin chose to erect the perimeter safety line eight feet in from the edge of the roof due to the increased pedestrian traffic on the jobsite. Panther carts were utilized for the crew members to tie their fall protection harnesses to for increased mobility. In lieu of other tie-off anchor points, the Panther carts allowed the crew to work more quickly, without having to stop to untie and re-tie themselves to different anchor points.

Another fall protection tool Chamberlin used to enhance productivity was a horizontal lifeline. This steel cable ran across the roof attached at each end with fasteners and a deck plate. This was another tie-off point for the crew members that allowed them to work freely and efficiently all over the roof. The project successfully concluded on time and with zero safety incidents.

Precise care was taken to provide the highest quality installation of the Soprema, GAF PVC and Firestone TPO roof systems. Very few punch list items were found for any of the roofs installed. Brett Biggers, Soprema Regional Technical Manager, commends Chamberlin, on the excellent workmanship and professionalism exhibited on the Dallas Love Field Modernization project saying, “There were numerous design, installation and logistical challenges associated with the project in addition to the weather extremes throughout the project’s lengthy duration. Despite these challenges, the project was completed with minimal deficiencies.”

Chamberlin is honored to have been a part of such a transformational project for a Texas State Historical Site that plays such a large role in Dallas’ community. 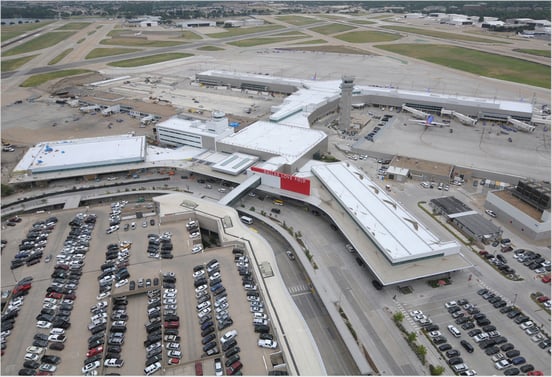