A lead environmental agency for the state of Texas recently faced roofing issues at their headquarters in Austin, TX. The facility was built in 1992 and is comprised of seven buildings. The existing standing seam roof on one of the buildings was starting to fail. The metal panels were coming apart, rust spots were emerging and the HVAC units needed to be upgraded. With a long history of remedial roofing projects, as well as substantial metal roofing experience, Chamberlin Roofing & Waterproofing was selected by General Contractor Kiewit Building Group to complete the roofing scope for this project.

Weighing The Pros and Cons
Deciding between a new roof or to re-cover the existing roof is the first decision a building owner must consider. A re-cover is the installation of a new roofing system over an existing roof. It is the quickest and least expensive option. There is a reduction in debris to manage, minimal noise and less of a risk for the owner because the roof is not being torn off the building and exposing it to potential water damage. When a roof is removed, there are safety and health factors to consider - will the debris become a safety nuisance? Will there be asbestos in the roof? However, working on an existing roof comes with its own challenges. As with most roofs, a variety of roof equipment is already 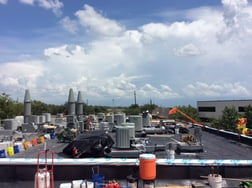 installed, creating obstacles to be worked around.

A re-roof is the complete removal and replacement of an existing roofing system. With a re-roof, the roof deck can be thoroughly inspected for any underlying issues and corrected prior to new roof installation. However, it is more expensive because more labor is involved with tear ing off the existing roof. The construction can also potentially disrupt day-to-day business due to the demo process.

Wiss, Janey, Elstner Associates, Inc. (WJE) was hired to conduct a roof survey to weigh the options and determine if the structure would also be able to support the extra weight of another roof. With confirmation that it would, a re-cover was decided on, as it was the most cost-effective choice and woud also mitigate business disruption.

The design for the roof re-cover was not your ordinary design. Because of the existing roof equipment – 52 HVAC units, four satellite dishes and 15 plume exhaust fans – the roofing crew needed to work meticulously to detail in the curbs. The roof insulation also had to be chamfered to fit inside the existing metal panel profile.

First, chamfered insulation was mechanically attached through a metal panel to steel purlins. Once attached, another layer of ISO was installed with a urethane adhesive. Then, a gypsum-fiber roof board was installed with a urethane adhesive to act as a cover board and thermal barrier. The SBS base sheet was applied directly to the cover board, then the cap sheet was torched to the base sheet. On the vertical walls, Chamberlin torched the base and cap flashing to the plywood and installed a termination bar at the top of flashing. The cap sheet was embedded with ceramic granules to give the roof the required Solar Reflectance Index (SRI) value. The crew then fabricated and installed stainless steel sheet metal counter-flashings and copings. Stainless steel was the best choice for this project because it is very durable and holds up well against weather.

Safety is #1
The importance of safety is critical for each project Chamberlin undertakes. To begin, parapet clamps were installed on the low parapet walls on the east, west and south sides of the roof to extend the height above 39 inches for fall protection on those elevations. The north wall on the gutter side had no parapet wall. In lieu of a warning flag line, which is comprised of a rope and flags hanging 34” tall, Chamberlin went a step further and created a safety guardrail system built of 2X4s standing over 39” tall and installed it 10 feet from the leading edge. This acted as a safe guard for not only Chamberlin employees, but also other trades and authorized individuals accessing the area.

Since the roof did not have existing tiebacks, butterfly anchorage points were installed on the north side for the crewmembers to tie off to while working outside the guardrail. These are hinged, temporary anchor points that are mechanically fastened to the roof and are capable of withstanding 5,000 pounds.

The roofing crew utilized Personal Fall Arrest Systems (PFAS) with yo-yos. The yo-yo is a self-retracting lifeline that allows for increased mobility and less restricted movement compared to a traditional lanyard. These allowed the crewmembers to install along the entire north side of the roof without having to move their butterfly anchors along with them. Doing so would have been labor intensive since each anchor is bolted to the roof with 16 screws. Also, another method of fall protection would have had to been employed while the butterfly anchor was unhooked from the roof. Additionally, if a fall were to occur, a yo-yo limits the free fall distance, catching almost immediately with its quick-activating brake system.

Once the gutter and edge of roof work was finished, the guardrail was removed in order to complete the installation of the roofing system and replaced with safety flagging installed six feet from the leading edge. The project was completed safely and efficiently with no incidents. 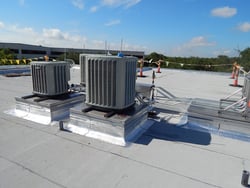 Rain, Rain Go Away
With record breaking rainfall in May and the wettest August since 2001, construction was periodically on hold. There was an aggressive schedule from the beginning, by the owner’s request, so working overtime and on Saturdays became the routine to stay on schedule because of the rain days. Keeping the lines of communication open and
coordinating with the owner, consultant, manufacturer and general contractor were crucial to staying on schedule. Chamberlin finished their scope of work on time, remedying the roof issues and leaving the building watertight