Frisco, TX, now claims one of the most dynamic development concentrations in America with their “$5 Billion Mile,” a one-mile stretch of real estate developments under construction along the Dallas North Tollway. The first of these developments is a $1.5 billion complex called The Star, a 91-acre campus encompassing the Dallas Cowboys World Headquarters, The Ford Center, two parking garages and two outdoor practice fields. 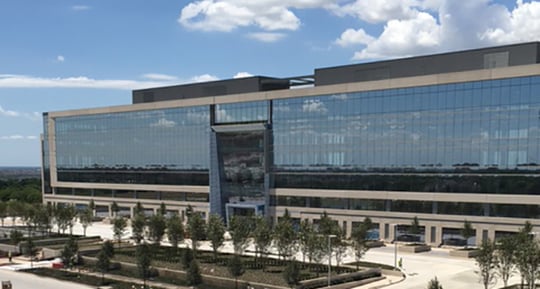 This innovative new detail keeps the parking garage watertight while keeping both waterproofing manufacturer warranties in tact. Additionally, it was the most cost-effective solution.

The Ford Center includes a two-story weight room with a balcony on the second level. This balcony was originally scoped for a paver system sealed with hot fluid-applied waterproofing. However, a large artificial turf area where the players can run drills for training purposes was later added. The new design included pavers surrounding only the perimeter of the mock field. The concern was if the pavers weren’t locked in and secured together across the entire balcony, the extra load and foot traffic of football practice would result in paver movement and trip hazards.

Chamberlin proposed a design that incorporated the turf field and allowed the pavers to cover the whole balcony, securely locked together. The pavers underneath the mock field were lowered one inch and the turf filled in that area, leveling with the surrounding perimeter pavers. Since the pavers were two inches thick, they were able to be offset by that inch and still all be tied together. The paver system was installed on top of a TPO roof system, since the first story of the weight room is housed below this balcony. This system effectively keeps water out of the building and limits the amount of paver movement when in use.

The south wall of The Ford Center was built under a tight schedule. Construction on the 38,000 square-foot wall began only three months before the building was scheduled to open, cutting normal production time almost in half. And it is no simple wall. The exterior of the south wall is comprised of metal paneling displaying a 2,270 square foot video board above a protruding glass entryway containing twelve doors. Chamberlin stepped up to the plate and completed their scope of spray-applied air barrier, top of wall firestopping and sealants in less than a month, working 12-hour days six and seven days a week for the benefit of the owner and the project.

The plaza in front of the south wall is over the parking garage, so weight restrictions and weight distribution of large equipment had to be taken into account. In addition, an eyebrow at the top of the wall prevented Chamberlin crew members from being able to access the area they needed to install the firestopping and sealants from an aerial boom lift or swing stage. The equipment would raise them almost 200 feet in the air, but they then had to crawl on the structure’s steel beams to reach the installation area. Connecting boards were installed so they could move from beam to beam. High winds further compounded this already challenging worksite.

Beam clamps were attached to every steel beam, to which the crew member installing the material tied off to with dual leg lanyards. With great care and coordination, the crew member below assisted his partner by first securing one of his lanyards and then moving the other lanyard to the next tie-off point for him, one at a time, for the length of the beam. With this system, every crew member was securely tied off at all times.

This extremely challenging and unordinary installation method was not only performed under extreme time constraints, but performed safely and successfully. 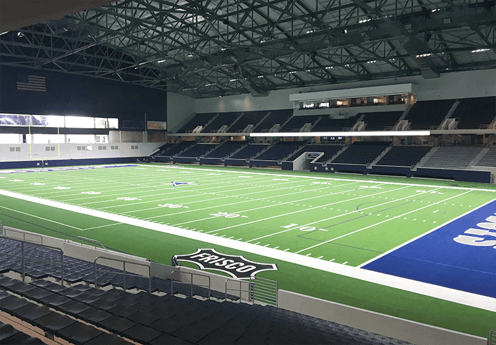