Ashford Oaks, a 13-story office building in San Antonio, Texas, built in 1984, was recently renovated under 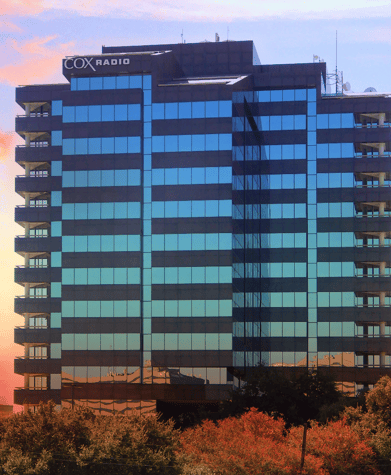 Woodside Capital Partners with upgraded elevators, exterior quality enhancements and an improved parking garage. Time and weather had taken its toll on this 34-year-old building, deteriorating the sealants and gaskets allowing water to infiltrate the building.

The original building construction did not include tieback anchors, which has since become standard practice for safety purposes. This lead Chamberlin to believe that no work had been done on the building envelope since it was first built. Naturally, tieback anchors were installed prior to work beginning so all scopes could be completed safely.

Chamberlin Roofing & Waterproofing was selected to perform a complete replacement of all sealants on the Ashford Oaks building envelope. This included wet glazing with Tremco Spectrum 2 as well as panel-to-panel joints and window perimeter joints with Tremco Spectrum 3.

Once construction began, some of the building’s joint sealants were found to have been installed with no backer rod. Backer rod creates the proper depth-to-width ratio of sealant in the joint and prevents three-sided adhesion. The backer rod is inserted into the joint first, so the sealant only adheres to the stone on either side, but does not adhere to the backer rod at the back. This gives the joint maximum flexibility to sustain the building’s movement over time. Backer rod is held in place by compression, and the rod selected should be about 20 percent larger than the maximum expected joint opening.

In areas where no backer rod was installed at Ashford Oaks, the joints were completely filled with sealant making the razor removal of the old sealant by hand a time-consuming process. After the old sealant was removed, crew members grinded the joint to remove any contaminants from the surface to allow for proper adhesion. Once the joints were cleaned and prepped, the crew installed backer rod and sealant for a water tight building envelope. Although this discovery created more work than expected, the crew stayed on schedule by working 10-hour days and weekends as needed.

A panel malfunction on the 13th floor prompted the owner to bring in a consultant to assess the building. Building Exterior Solutions, a Terracon Company, discovered that the row of panels on the 13th floor was connected by a different method than the rest of the building’s panels. For most of the building, mechanical fasteners were used to attach the heavy granite panels to the building’s structure. On the 13th floor, however, the panels were attached with liner-block and epoxy adhesive. Chamberlin had just completed the cut-out and re-caulk of the 13th floor, and the consultant continued their investigation to determine if the new sealant would be strong enough to support the panels’ weight or if an additional means of attachment would be necessary.

In the meantime, they determined that the rest of the building was safe to work on, so Chamberlin was able to complete their wet glazing scope on the other levels.

Chamberlin Roofing & Waterproofing and other restoration subcontractors were approached by the owner of Ashford Oaks to revamp the envelope of the office building. The candidates had to perform a mock-up installation prior to being awarded the project, and Chamberlin came out on top with the best workmanship and most competitive price. 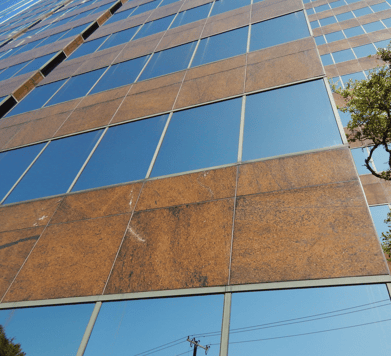 When asked what one should notice about a well-installed caulk joint, Chamberlin Project Estimator, Nick Flory stated, “Nothing. You do not want it to stand out; you want it to blend smoothly into the building.” Chamberlin’s diligent work resulted in aesthetically pleasing sealant joints with a concave finish as well as good adhesion.

Woodside Capital Partners was very pleased with the finished product and also commended Chamberlin crew members and office staff for their professional and cooperative handling of the project’s challenges as well as pushing through for a job well done. 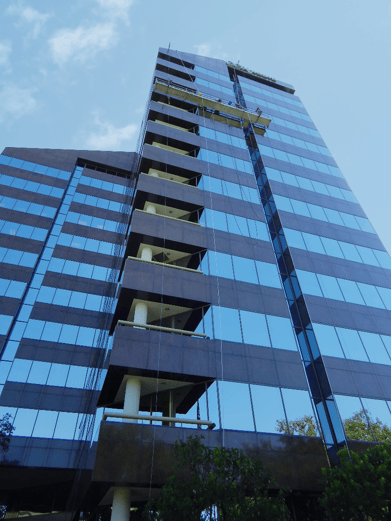 Chamberlin completed 20 drops around the building during their scope. Attention to detail was crucial for safely rigging the swing stage each time. The crew would lower the stage to the ground and then start the process of moving the swing stage, outriggers and weights to the new drop location. There, the swing stage was reconstructed and secured to tieback anchor points. Chamberlin’s crew members were tied off with separate lifelines and anchor points.

Flory was impressed with the crew’s performance and safety mindset. He said, “The guys are the ones out there every day, getting it done. They did a good job and they did it safely.”