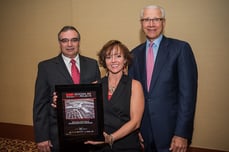 The Dallas Love Field Modernization Program was the largest and most ambitious construction effort since the airport's establishment in 1917 and involved a complete terminal renovation and expansion, the addition of new concourses, a larger baggage claim and new ticketing wing.

The Associated Builders and Contractors (ABC)Excellence in Construction (EIC) awards program recognizes outstanding projects in the commercial construction industry. The projects are judged on innovative programs relating to quality, productivity and scheduling, as well as special obstacles and extenuating circumstances overcome and any value engineering process. A project must be awarded first or second place at the ABC local chapter’s competition to qualify for the national level. Chamberlin had three  projects qualify to compete nationally in 2016. The Love Field Modernization Program was bestowed an ABC EIC award through TEXO, North Texas’ ABC Chapter. Additionally, Chamberlin was honored with an ABC Oklahoma Excellence in Construction award for INTEGRIS Baptist Hospital and an ABC Greater Houston Excellence in Construction Merit award for their work on a corporate project just north of Houston.

Chamberlin installed an environmentally friendly hot rubberized asphalt waterproofing system for the renovation of INTEGRIS Baptist Medical Center’s entryway in Oklahoma City, OK. The project was divided into two phases, with half of the entryway to be waterproofed in Phase I and the other half during Phase II. However, the phases were to be completed months apart, so the concern was water infiltration from the old waterproofing system ruining the new system. Chamberlin found the solution  by creating a unique waterproofing detail that separated the new system from the old keeping it watertight until the installation could be completed. 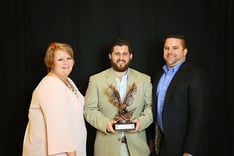 Additionally, Chamberlin Roofing & Waterproofing completed their largest project to date for a corporation just  north of Houston on their new 385-acre campus. Chamberlin installed over 3,000,000 square feet of below-grade waterproofing, 255,000 linear feet of joint sealants and a TPO roofing system on 16 buildings. Their scope also included installing approximately 600,000 square feet of traffic coating to three parking garages, with a unique twist - a mural on each garage roof depicting an aerial landscape view of the company’s different locations around the world. Instead of paint, these murals were created with the traffic coating, which  was a colored polyurethane waterproof coating combined with pool quartz. This took intricate planning and mapping, extreme attention to detail and precise application. The incredible final product is one-of-a-kind works of art on each roof.