Chamberlin Chosen as the One Source for Building Envelope Restoration 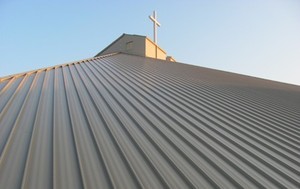 Great Hills Baptist Church is a dynamic congregation with a 300,000 sq. ft. sanctuary and education facility near the Arboretum in northwest Austin, Texas. With two Sunday morning worship services, Wednesday services, group meetings and a pre-school ministry, the church is constantly buzzing with activity. Though their facility is only 20 years old, the congregation has been together for over 60 years. In the 1980s the church members built their current meeting place on Jollyville Road one building at a time. Today, the church has three structures; a sanctuary and two adjoining administration and education buildings.

The church began experiencing leaks in the sanctuary ceiling and around windows in the administration office and education wings. “The existing metal roof at the time was an exposed fastener system over sheet metal supports with fiberglass insulation and a vapor retarder,” explained Ken Ollinger with Austech Roof Consultants. “In our Austin climate, the vapor retarder was contributing to condensation, and because of deficient flashings it led to leaks in the church sanctuary.” 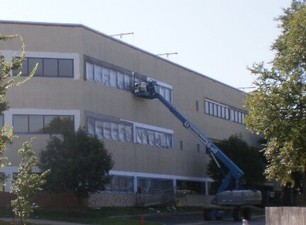 Since their goal was to become a more “radiant church,” Great Hills decided to make the necessary investment to ensure their facility would be around for many years to come to serve the community and its members.

With a plan of action put together by Austech, Chamberlin was chosen to be Great Hills’ single source contractor to resolve all roofing and waterproofing issues. “Chamberlin was hired for two reasons,” said Great Hills’ Administration Pastor Mike Mericle

Chamberlin’s scope of work included installing a new concealed fastener metal roof system over the sanctuary, reflashing approximately 90 windows, installing joint sealants and applying an elastomeric coating to the entire EIFS façade. “This project fit our capabilities perfectly because of the large scope of roofing and waterproofing work that we are able to self-perform,” said Roofing Project Estimator, Russell Johnson. 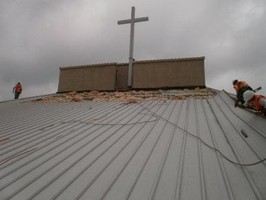 The leaking roof in the sanctuary caused drywall damage to the ceiling. “It was a little tricky repairing the interior sanctuary ceiling,” said Waterproofing Senior Project Manager, Pat Halaszyn. Work took place 100
feet in the air and was only accessible by narrow cat walks. “I liken it to Michelangelo painting the Sistine Chapel but on a tight rope with a modern day safety harness,” Halaszyn added. The ceiling drywall was nimbly repaired while the exterior metal roof was being replaced.

Chamberlin removed the existing 50,000 sq. ft. metal roof over the sanctuary and replaced it with a new standing seam metal roof system and insulation all while keeping the church open for services. The roof is shaped like an uneven hexagon with a steep 6:12 pitch, so stringent safety precautions were instituted during the replacement process. 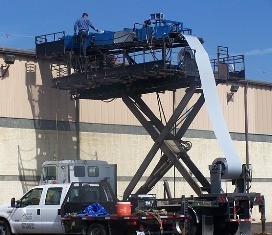 To eliminate access points for water, Austech’s roofing specifications called for single, monolithic-like metal panels to run the full height on the roof. Some areas of the roof were in excess of 130 feet long.  Since such large panels are not easily transported, Chamberlin utilized Architectural Building Components’ Archzilla®job site production truck to custom fabricate the metal on location. This also allowed the Chamberlin team to take the panels directly from the truck to the roof for installation, making for a more productive project.Additionally, Chamberlin replaced the vertical metal wall panels that tie into the roof at the eaves and installed new vertical panels over a façade area surrounding the large cross at the peak of the roof. 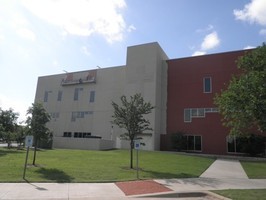 While the new roof was being installed, Chamberlin waterproofers reflashed and recaulked windows then used an elastomeric coating to seal the whole façade. The new elastomeric coating changed the church from a beige to a brick red color, making it stand out a bit more in the neighborhood.”

The bright, new look definitely helps us reach toward our goal of becoming a more radiant church,” Mericle said. “Our facility will now be able to serve us well for years and years to come,” he continued, “Chamberlin was great to work with and very accommodating.  Churches are a unique environment with activities and children in the facility every day, and Chamberlin was most cooperative and flexible with our schedule. It was a well coordinated.

Great Hills’ members faithfully prayed for the Chamberlin team every morning and even provided a fellowship meal for the workers once a week, a treat to which the team was not accustomed. Great Hills’ prayers and extra care were much appreciated and helped Chamberlin beat the production schedule without any accidents or injuries. The new roofing and waterproofing was even put to the test last September when 12 inches of rain fell on Austin in one day. The city saw major flooding, but Great Hills Baptist Church did not have a single leak from the new roof or restored building façade. Both Great Hills and Chamberlin’s prayers were answered!