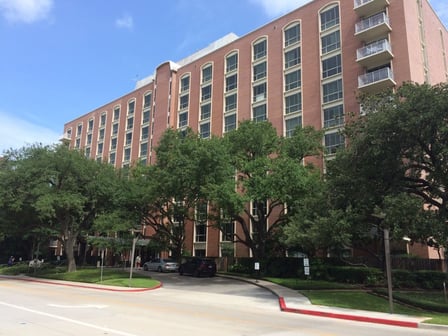 Over 40 years of weather and time can take its toll, and recently water intrusion at various locations on this 10-story building became apparent. The exterior brick façade also needed to be revitalized. Due to Chamberlin’s experience in remedial construction, professionalism and dedication to safety, JPS Consulting enlisted Chamberlin Roofing & Waterproofing to repair the leaks around the windows and restore the facade.

Since the building was to remain occupied during the repairs and restoration, the protection and respect of the residents and visitors was vital. Chamberlin conducted in-house safety meetings to discuss daily tasks. The crew defined all exclusion zones and utilized the appropriate signage to ensure the safety of all residents, visitors and on-site contractors. Bi-weekly site meetings with The Hallmark representatives, JPS Consulting, Chamberlin’s Project Manager Luis Antezano and Superintendent Thomas Borrosco were also part of the project’s success. The potential noise factor and time constraints were concerns as well, and Chamberlin developed and maintained a job schedule that catered to The Hallmark’s time frame with minimal  disruption for their residents. 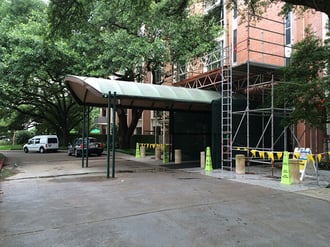 Clean as a Whistle

Chamberlin’s scope of work began with high pressure power washing of the building to remove dirt from the existing brick and expose any imperfections in the grout, as well as cracks in the exterior skin of the building. Then the crews repaired the reverted joint sealants and the cracked mortar and brick. A second power washing was performed after the repairs were complete to remove any dust or debris so the substrate was in prime condition to receive the optic coating, which was the final step of the renovation.

The brick that was originally used to construct The Hallmark was discontinued prior to renovation. Chamberlin was challenged to find a new brick that matched the existing masonry closely enough to use as a replacement in some areas that were too damaged to be salvaged. Chamberlin went through many brick samples to no avail until finally a brick was discovered in Austin, Texas, that was thought to be a good match. However, when the sample arrived on site, the color appeared too light next to the existing brick. Chamberlin applied a clear optic coating to the sample. Even though the sealant is clear, the porous brick absorbed part of the liquid, darkening it slightly, resulting in a very close match to the original.

The crew then replaced the broken bricks and reverted joints and performed crack repairs. The reverted joints were originally sealed with mortar. The joints in this building are very active and that movement was causing the mortar to crack due to its rigidness. Instead of replacing the joints with more mortar that would continue to crack, a silicone sealant was the best option.

Chamberlin began tuckpointing the joints by applying primer and inserting a backer rod. The backer rod was then tooled into place with the silicone. While this material was a good choice because it allows for flexibility and elongation, aesthetically it would not match the mortar joints so Chamberlin rub brushed a color-matched sand into the silicone. When finished, one could not tell the new joints apart from the existing joints.

After the brick and cracks were repaired, Chamberlin applied two coats of clear elastomeric optic coating. This material is a very effective waterproof coating that maintains the look of the original construction. Chamberlin left The Hallmark with a watertight building renewed to its original beauty. 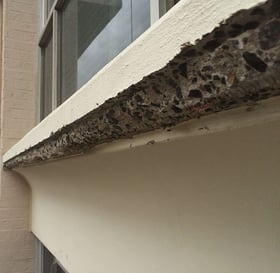 The rigging logistics for this building were not ideal. Most modern high-rise buildings are equipped with roof anchors, davits or other type of rail systems to which swing stages can be anchored. However, the only potentialtie-off points on the The Hallmark’s roof are CMU scuppers, and they are not sturdy enough as an anchor to sustain the minimum load requirement of 5,000 pounds. Chamberlin created a system to safely suspend their swing stages by running the tie back cables and the crew members’ safety lines across the roof and down the back side of the building where they were tied off to eye bolts that were anchored into the foundation of the building. With this system, the rope lifelines were exposed to potential abrasion damage as they ran up and over the roof’s parapet wall and scuppers. To counteract this, heavy duty nylon was secured around them with Velcro.

Chamberlin had two stages per elevation running consecutively, sequencing their drops for maximum productivity. Two independent safety inspectors and the owner of the equipment rental company inspected the swing stage system before it was put into use. During the project, the equipment was inspected prior to use each shift by Chamberlin’s trained competent person.

Joel Smith with JPS Consulting commented on Chamberlin’s safety culture saying,  “I have observed a distinct, concerted effort by your field team, led by Thomas Borrosco, to ensure the safety of The Hallmark’s residents and Chamberlin’s team of dedicated workers. They respect the dignity  of the residents, protect them with excellent, timely planning and execution of their daily plans. No unnecessary risks are taken. When I make site observations, I find your field crew to be fully PPE’ed (Personal Protective Equipment). They keep the Hallmark administration fully advised of where they will be working with two week look-a-heads so as to keep the residents, staff and guests fully apprised of the exclusions zones.

Your men have been observed to be fully tied-off, 100% of the time, in their swing stages. I have observed daily inspections of the swing stage equipment along with the necessary safety measures including fire extinguishers, equipment lanyards, anchorage checks, support confirmation and access strategy options. Your site is a safe, clean site, and I learn something from your team each time I listen and observe them.”

The Hallmark representatives were extremely pleased with Chamberlin’s project management and quality work delivered professionally in a timely manner. Chamberlin has subsequently been awarded an additional contract for The Hallmark’s parking garage structural restoration and also enlisted to perform a water leak investigation on another building on the property. Chamberlin is proud to have provided the level of service that develops a customer into a client who entrusts Chamberlin time and again with their roofing and waterproofing needs.