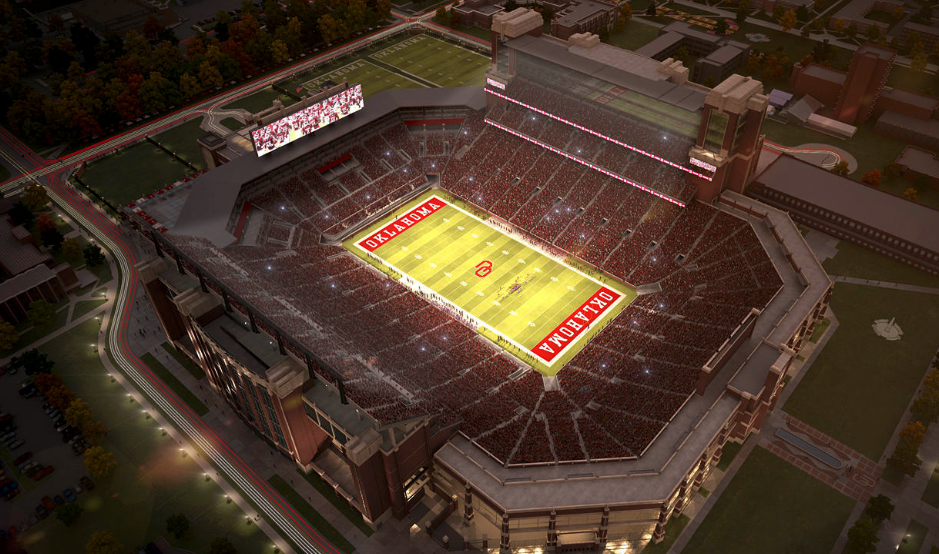 The Gaylord Family Oklahoma Memorial Stadium is one of the most well-known football stadiums in college football. With a total seating capacity of 82,112, the stadium ranks among the 15 largest on-campus facilities nationwide. For years, the stadium struggled with moisture intrusion, especially at expansion joint locations throughout the stadium bowl. Multiple unsuccessful attempts to retrofit and repair these conditions were made evolving into an annual maintenance item for the university and creating escalating repair costs.

Chamberlin was hired to find a permanent solution for the expansion joints and ultimately stop the leaks. Additionally, their scope for the stadium renovation included structural concrete repairs, crystalline waterproofing, epoxy injection, joint sealants, extending concrete steps for widened aisles and adding intermediate steps to the east side of the stadium. Chamberlin used carbon fiber reinforcement (FRP) to repair and reinforce support beams under the stadium allowing them to withstand more force to increase the lifespan of the stadium. The existing traffic coating on the north, west and east sides of the stadium bowl was prepped to receive an overlay traffic coating system in lieu of removing the entirety of the existing coating. Bentonite waterproofing was installed at the below grade walls where new concessions were built under the north end zone.

Back to Sports-entertainment Projects