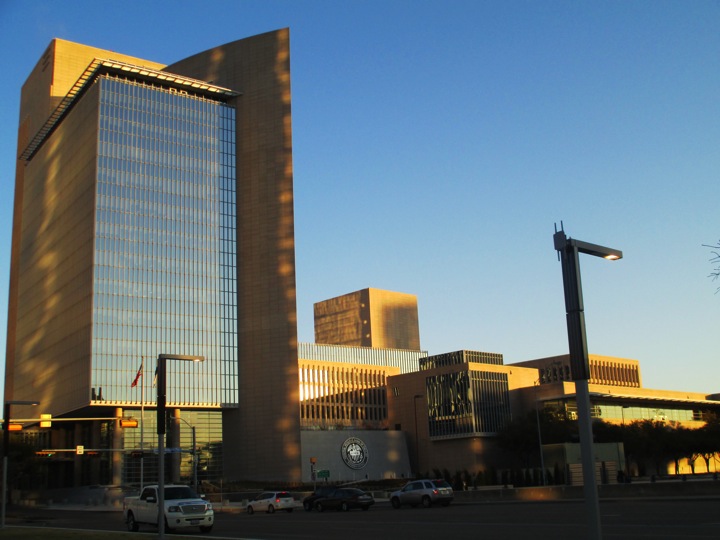 As one of twelve banks in the Federal Reserve System, the Dallas Federal Reserve Bank, also known as the Dallas Fed, serves the Eleventh District consisting of Texas, northern Louisiana and southern New Mexico. The 1914 decision to locate the regional Federal Reserve Bank in Dallas is considered one of the most important economic events in the history of North Texas. Dallas won out over Houston, New Orleans and Austin in its selection as the site of the new Eleventh district bank. The move solidified the city’s key role as a financial and business hub for the region.

The Dallas Fed met for six years in local bank offices downtown until 1921 when it moved into its new headquarters and continued business there for 71 years. In 1992, The Dallas Federal Reserve Bank made another move into a state-of-the-art facility encompassing a total of one million square feet of floor space.

For the original construction of these headquarters in 1992, Chamberlin performed waterproofing below grade and on the plaza decks plus exterior caulking. For the next twenty years, Chamberlin’s experience and expertise were trusted to assist with upkeep and maintenance on the Dallas Fed. Then in in 2011, Chamberlin was called upon again and chosen from a select list of bidders for the Dallas Federal Reserve Bank’s exterior skin re-waterproofing, cleaning and sealing. Covering 260,950 square feet of skin, Chamberlin cut out and re-caulked over 33 miles of 5/8” joints with structural silicone, in addition to 25 miles of wet glazing on curtain wall. Subsequently, Chamberlin crews power washed the building with a 2300 psi pressure washer and applied a penetrating sealer. With five swing stages and twenty men in twelve months, Chamberlin completed this project on time, on budget and with no accidents. Chamberlin was honored to receive ABC National Excellence in Construction Pyramid Award for their exterior waterproofing repairs.

Back to Government Projects