The Piedmont at River Oaks is a four-story luxury apartment complex comprised of 80 residential units and a parking garage. Located in Montrose, also known as “The Heart of Houston”, the residents are minutes from restaurants, parks, museums, retail and running trails. Built in 2006, time and weather had taken their toll on the buildings. Additionally, the original building wrap waterproofing had failed, and through-wall flashing and weep system at each floor line were not installed. These circumstances necessitated a large-scale renovation. Chamberlin Roofing & Waterproofing was contracted by Building Engineering Consultants, Inc. (BECI) to perform both roofing and waterproofing scopes.

This vibrant area is home to hundreds of Houstonians and giving them quality, safe housing is vital to the community. Chamberlin’s restoration work included replacing deteriorating balcony handrails, remedying water infiltration by establishing an improved waterproofing system, recladding the façade and replacing pool drains. These elements not only delivered improved aesthetics, but also created safer living conditions and gave the buildings a sustainable solution to mitigate water infiltration.

Prior to job start, Chamberlin project management created over twenty schedules before finding one that would work. The challenge was systematically integrating four to five trades to a strict timeline, each working at different paces within the same small, constricted work areas. Additionally, the project schedule to complete the demo, restoration and re-roof of two buildings was only eight months long. Chamberlin closely monitored each crew’s production and adjusted the schedule when necessary to help mitigate any one trade restricting the progress of another. 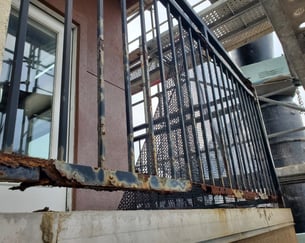 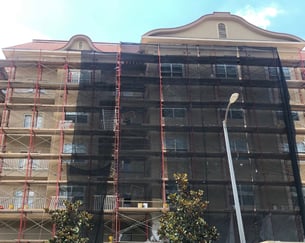 Chamberlin prides themselves on doing a job right one time, the first time. There were many quality control checks in place throughout the duration of this project. Chamberlin conducted daily and weekly reviews and worked with the manufacturers on precise, efficient installations. Chamberlin had a full-time, on-site project coordinator who helped oversee quality and keep the project on track, and the Engineer of Record performed weekly site visits.

During remediation of the exterior building walls, almost 50,000 square feet of stucco was recladded. Underneath, over 27,000 square feet of sheathing needed to be repaired. Once the repairs were made, the City of Houston inspected all sheathing and lathe before new stucco was installed. Good communication among the various trades, project management, operations and quality assurance staff was essential to delivering a high-quality project. Despite having over 30 inclement weather delays, Chamberlin was able to complete the project on time, with no leaks and with zero safety incidents.

Chamberlin provides craft and safety training throughout the year with Chamberlin University. Educating our team members on safety and technical skills empowers them to deliver quality, cost-effective projects that are completed safely and productively. For each project, and Piedmont was no exception, Chamberlin works to provide our technicians the proper knowledge, tools and equipment they need to complete their scopes.

The project site was crowded with tradespeople and residents. When working overhead, the crew installed extensive safety netting to keep workers and residents safe from falling debris. The adjacent walkways were also covered to protect pedestrians. Chamberlin’s safety coordinator was invited to speak to other trades on several occasions to help them keep their approach to safety uniform and uphold equal importance of safety regardless of the scope of work.

For the new modified roofing system to meet an R-Value of R-25 to fulfill the project’s specifications as well as the City of Houston Code, more insulation was required than for the original roofing system. Due to the increase of insulation thickness, Chamberlin realized the minimum eight inches flashing height required by the manufacturer for this system was going to be a challenge in some areas. For example, the space around the elevator penthouse only allowed for less than two inches of flashing. The resolution was installing plywood on all four sides at the elevator penthouse which allowed for the proper flashing height. The rest of the penthouse was wrapped in TPO roofing membrane sealing it watertight.                               Chamberlin recladded exterior stone and stucco
and replaced failing waterproofing underneath.

The need to reclad a stucco building short of its projected life is likely evident of poor waterproofing during initial construction. The strength of Chamberlin’s reclad work on Piedmont was in the waterproofing plans. The BECI-Chamberlin team understands water management, and BECI developed every aspect of the reclad system from the standpoint of keeping water out of the building.

In addition to the original building waterproofing failing, the lack of through-wall flashing at each floor line allowed water to escape behind the cladding. Moving to the BECI reclad design provided for water shedding at all floor levels without changing the aesthetics of the building.

In less than eight months, Chamberlin provided superior waterproofing and roofing services in a timely manner with special considerations for quality control and safety. The Piedmont at River Oaks can now offer their residents a watertight home that is built to last.

A lead environmental agency for the state of Texas recently faced roofing issues at their headquarters in Austin, TX. The facility was built in 1992 and is comprised of seven buildings. The existing...