The Drawing Board: Cool Reflective Roofs are Energy Smart in All Geographies

In 2012, the eighth consensus-based sustainability standard developed through NSF for building products went into effect — NSF/ANSI 347, Sustainability Assessment for Single Ply Roofing Membranes. It is the first standard for evaluating and certifying sustainable attributes of low-slope single-ply roofing membranes over their entire life cycle. 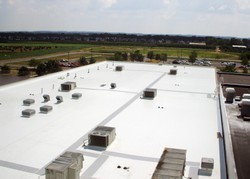 As products with environmental claims continue to enter the marketplace, independent, third-party certification of products to national standards can help architects and specifiers make educated decisions about product selection. Product design and manufacturing, membrane durability, corporate governance and innovation are all addressed in the standard. NSF 347 is also the first standard that addresses the building envelope, carrying with it the potential for improving building energy efficiency while positively impacting the quality of the urban environment.

As more utilities charge premiums on electricity rates during peak demand hours to try and influence behavior and even out the load on their strained systems, the need to present owners in all climate zones with sound strategies for reducing peak building cooling demand will escalate. According to the United Nations Intergovernmental Panel on Climate Change, for most regions in North America a one-in-20-year hottest temperature event will become a one-in-two-year event by the end of the 21st century — and the one-in-20-year maximum daily temperatures will increase 4-9 degrees Fahrenheit. There is no sign of these trends reversing themselves in the foreseeable future.

Fortunately, there is no shortage of modeled and empirical evidence that white roof surfaces reduce building cooling energy consumption regardless of geography. White thermoplastic materials, which have been in use since the 1960s in Europe and the 1970s in North America, reflect a significant portion of incident solar radiation back into the atmosphere (reflectance), and also quickly release to the atmosphere the fraction of energy that the roof absorbs (emittance). The result is a lower roof surface temperature during the summer months when compared to dark colored roofs.

Lawrence Berkeley National Laboratory’s 2001 study of a retail store in Austin, Texas, revealed that simply by switching a black colored membrane to a white membrane, the average summertime rooftop surface temperature on the facility decreased from 168 degrees Fahrenheit on the black to 126 degrees Fahrenheit on the white. This resulted in peak hour cooling energy savings of 14 percent and overall annual energy savings of 7.2 cents per square foot (the equivalent of 9.5 cents per square foot in 2013 dollars). 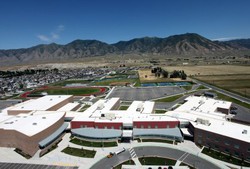 Not surprisingly, greatest net energy savings were calculated for states like Arizona, New Mexico and Nevada. LBNL’s modeling showed that there could be a small heating penalty associated with the use of cool roofs in the coldest climates. In Minnesota, for example, the value was on average 0.137 therm per square meter per year for conditioned commercial buildings. But excluding remote Alaskan locations, the summertime cooling energy savings more than offset any heating penalty, producing net annual energy savings.

The experience of major building owners such as Target Corporation, with approximately 1,900 facilities across the United States, broadly bears out the research. For more than 20 years Target has used reflective PVC roof membranes on all of its facilities, an important component of its energy efficiency program.

While it’s understood that reflective roof surfaces can reduce overall energy consumption, no private or government cool roof initiatives suggest that using a cool roof is justification for using less insulation. Savvy project owners are looking to use all available means and technologies wherever practical and cost effective to reduce building energy consumption, rather than partially substituting one approach for another.

For each ASHRAE climate zone, Oak Ridge National Laboratory (ORNL) estimated the energy equivalency of cool roofs vs. non-cool roofs with additional insulation to determine the extra insulation required to achieve “energy equal” roofing systems for new construction and retrofit. ORNL selected one city from each ASHRAE climate zone and assigned a default R-value for a cool roof (reflectance: 0.65, emittance: 0.90). Then ORNL determined the additional insulation that would be required under a non-cool roof (reflectance: 0.10, emittance: 0.90) to produce similar heating/cooling costs as the cool roof. In all climate zones, additional insulation required for energy equality ranged from R3 in Fairbanks, Alaska, to R17 in Miami, Fla., with an average of R9 in new construction and R4 in retrofit. (See Table 2.)

Even in locations where net energy savings may be modest, combined with the additional benefits of reduced peak demand and a contribution to the reduction of the urban heat island effect, cool roofing technology provides a comprehensive package of benefits in all climate zones.

Stanley P. Graveline sits on the technical committee for the Vinyl Roofing Division of the Chemical Fabrics and Film Association. For more information, visit www.vinylroofs.org/cool. Follow Vinyl Roofs on Twitter via @reflectiveroofs. This article was originally published in Architectural Roofing & Waterproofing/WC Architect magazine