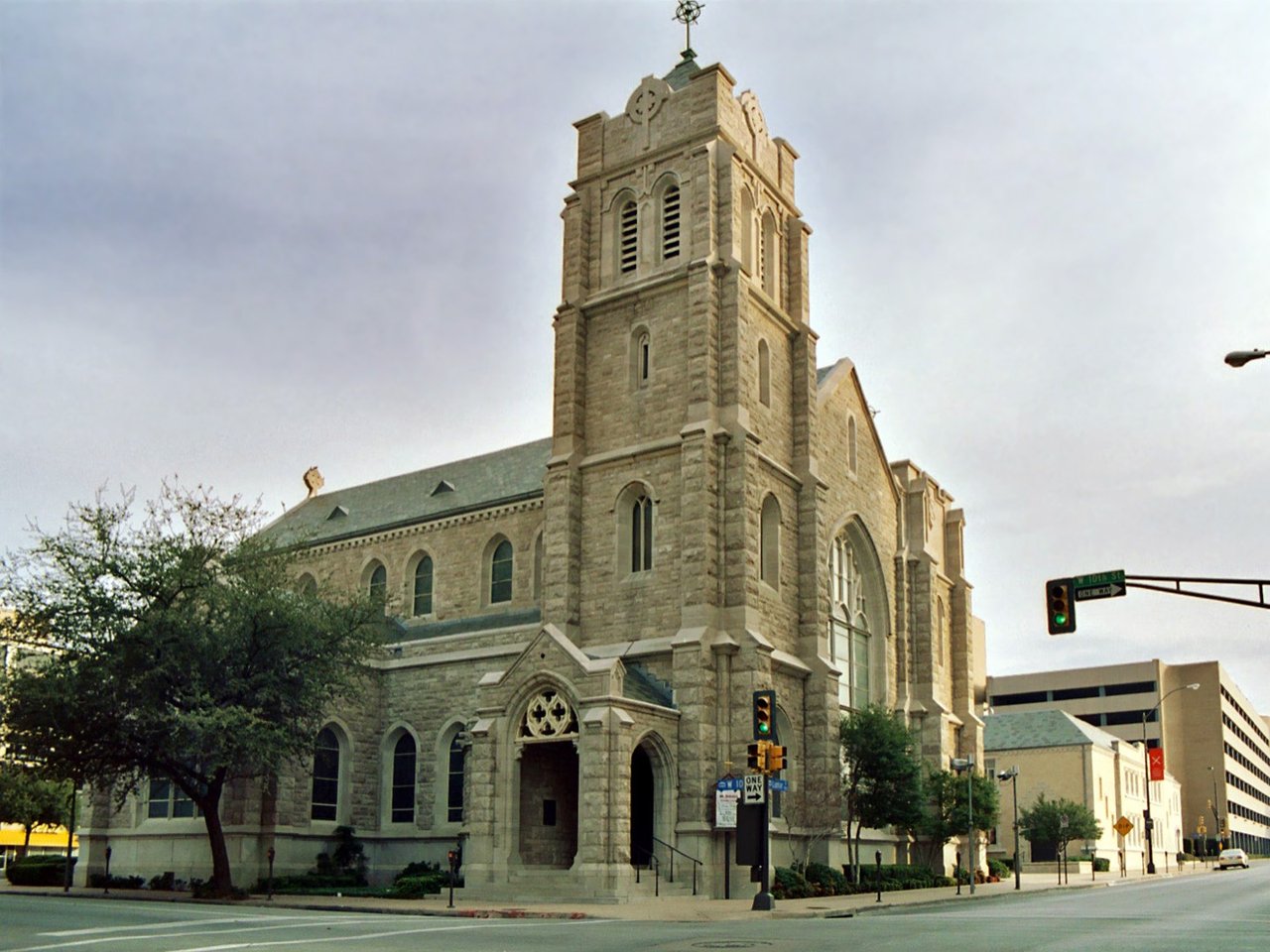 St. Andrew’s Episcopal Church, built in 1910, is widely regarded as one of the most beautiful Gothic Revival churches in the Southwest. Over the years, the church has been expanded several times including the addition of the Parish House, which was built in 1949. In 1983, another addition took the building to a full block’s length.

In 2018, the building had been experiencing leaks for nearly a year, primarily over the kitchen and choir area, due to unknown causes. The first step Chamberlin took was to perform water testing to identify the leak sources. Once this was determined, a full roof replacement was recommended to rectify the extensive water intrusion and hail damage from a storm the previous year. A TPO roofing system would be installed for the flat roof areas. Additionally, custom-made copper flashing would be replaced on the roof edges, walls, ridges and gutters. The top two rows of slate roofing would be replaced due to asphalt seepage from the original roof system. 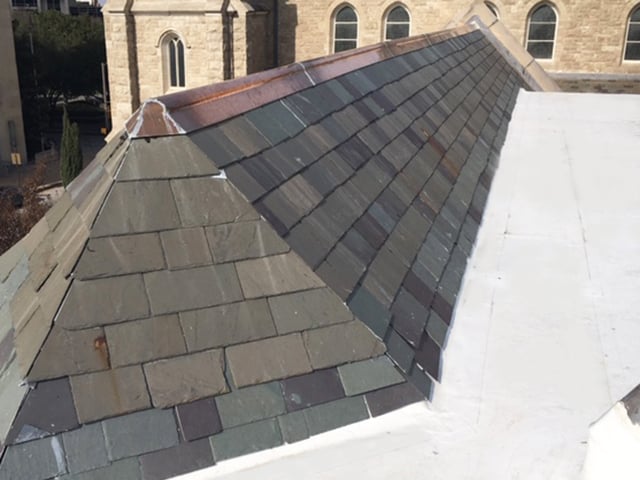 The top two rows of asphalt-stained slate roofing on the roof peaks were removed and new shingles were installed.

To begin, the existing modified bitumen roofing system was removed. Then two layers of 2.6-inch Polyiso insulation was installed, followed by a one-half inch cover board. Finally, a 60-mil fleeceback TPO membrane was adhered to the substrate. Copper flashing pieces were fabricated by Chamberlin sheet metal experts and installed with fasteners. The asphalt-stained slate roofing was removed and re-installed. Where the six-layer felt system underneath the slate roofing was damaged in some areas, Chamberlin installed an Ice and Water Shield vapor barrier providing moisture protection for the plywood decking underneath to help mitigate water infiltration into the building.

This church is located in the center of bustling downtown Fort Worth. It’s a busy city with crowded, narrow downtown streets, an abundance of businesses and limited parking. These logistical challenges proved difficult for material delivery, staging and roof access.

The large semi-trucks delivering materials had to carefully navigate the tight downtown streets to reach the construction site. Once there, one lane of Texas Street had to be shut down so they could park and unload. The project’s material distributer helped speed up the receiving process by lending a hand; two forklifts were unloading simultaneously to clear the road as soon as possible. There was extremely limited area to store materials on site as well. Chamberlin worked with St. Andrew’s to utilize the metered parking area behind their building to stage materials and equipment.

The chapel roof has a steep peak about 30 feet high that called for an 85-foot boom lift to access. Operating the boom lift necessitated multiple street closures, which required a road closure safety plan approved by the City of Fort Worth. Dallas Light and Barricade formulated the safety plan and provided equipment such as signage, barricades, cones and more. Chamberlin sought approval from the City and executed the plan. Proper signage was erected prior to the street closures to alert drivers. Barricades were also used to close the sidewalk the boom lift extended over. A team effort made this execution possible with minimal disruptions for the downtown patrons, while keeping the safety of those on the job and in the surrounding area a primary focus.

On the roof peaks, the original slate shingles were installed with an asphalt underlayment. A combination of the weight of the slate and high Texas temperatures over the years had caused the asphalt underlayment to melt. This liquid seeped out of the top of the peak where the slate meets the copper ridge and dripped down onto the top two rows of shingles. The original slate roofing was custom made, and Chamberlin was challenged with finding the manufacturer. Research uncovered a company overseas from whom the slate could be purchased, factoring a delivery time of three to four weeks into the schedule as it would be shipped by boat.

The one portion of the roof that could be utilized for material storage was a 1,700-square-foot area inset into the center of the roof over the administrative office, which is about 15 feet below the rest of the roof’s elevation. This required the crane operator on the ground to essentially deposit materials into a hole he could not see. To combat this challenge, Chamberlin put an extra set of eyes on the task. In addition to having someone on the roof to unload the crane, another crew member was a spotter on the higher roof directing the crane operator as his eyes and ears to accurately and safely deliver the materials to the correct place.

Chamberlin sheet metal experts fabricated 1,250 lineal feet of custom-made copper flashing pieces to be installed throughout the project. This process was completed in Chamberlin’s sheet metal shop, and the materials were transported to the jobsite. The copper material is very aesthetically appealing but is also costly. Chamberlin sheet metal mechanics were fastidious when breaking the pieces for optimal accuracy to cut down on material waste. Care was also taken to keep the material in pristine condition while in transit to the jobsite. 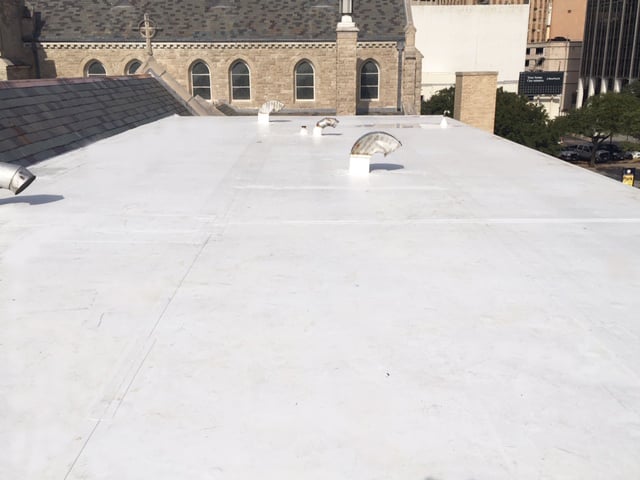 This 27,500-square-foot roof replacement was completed in less than four months during which time Fort Worth received nearly 30 inches of rain. Chamberlin increased manpower and kept up productivity as much as possible by installing what they could during the rainy season, such as the copper flashings. The TPO roofing was completed in time for St. Andrew’s populous Christmas services, which means the majority of the equipment, materials, dumpsters and crew members were removed from the property. This not only freed up space and parking for the parishioners, but cleared out the construction clutter so the festive decorations and elegant church could be admired.