Reimagining the Plaza: Balancing Past and Present in Rehabilitation

A benchmark for the service life of building enclosures is  50 years, with 25 years being the standard for major capital improvements, according to the WBDG Whole Building Design Guide®. By these criteria, modern public spaces of the late 1960s and earlier are at the end of their service lives and many are in need of long-overdue rehabilitation. Even postmodern plazas are reaching the age where major renovations are necessary to extend their usefulness.

Rehabilitation of these historic public spaces presents unique opportunities. Communities are challenged to preserve midcentury plazas as integral to the context of the buildings that surround them while recognizing that how people use and experience plazas, and how those places contribute to the urban environment, have changed since their construction.

As Audrey Wachs observed in the December 2017 issue of The Architect’s Newspaper, “Modern and late-modern landscapes in American cities are the least appreciated and least understood outdoor spaces… Despite their historic significance, these sites are constantly imperiled by bad maintenance, and the public antipathy that follows…”1

Because plazas and public spaces are inextricably attached to their parent buildings, an understanding of how the two coexist and support each other must be part of the conversation when these spaces require rehabilitation.

Plazas that support skyscrapers—such as the Seagram Building, One Chase Manhattan Plaza and 1251 Avenue of the Americas in Manhattan (see Photo 1)—are typified by wide expanses that serve as a platform for these modern structures. How this was accomplished varied. The Seagram Building (see Photo 2) and One Chase Manhattan plazas are fields of granite while 1251 Avenue of the Americas uses a large pool and fountain on its major elevation to establish the horizontality that dominates the style.

The Manhattan House, on the other hand, has public space and portes-cochere intended to emulate country roads and
gardens and establish a counter-point to the white glazed brick residential high-rise they surround. Lever House in Manhattan and Freeway Park in Seattle are examples of a marriage of these two themes. The inset plaza of the Lever House is a modernist hardscape internalized and secluded from the street plane (see Photo 3), while Freeway Park is a “blending of the urban and natural environment,” according to the nonprofit Project for Public Spaces (PPS).

The context in which these spaces were created cannot be ignored. A plaza like that of the Seagram Building was more than just an opportunity to introduce public space to an urban setting. Here, plaza and building served as a statement about previous skyscrapers. Earlier structures often occupied entire sites, ignoring the street plane and providing little relationship to the city at that scale. In contrast, the modern plaza served as a transition between street and building, marrying the skyscraper to its environment at a personal level.2

Today, communities view public spaces differently than they did 50 years ago. People interact with them differently and expectations have changed.  We now require our public places not just to serve the community as gathering place, but to improve the environment.

While the philosophical and social aspects of plaza rehabilitation have long been debated, the technical considerations are no less daunting. They include the following:

Thermal Efficiency: Energy efficiency was not a governing principle 50 years ago, and many historic plazas were constructed with little, if any, insulation. For commercial buildings, the 2015 International Energy Conservation Code (IECC) requires that plazas located over occupied, conditioned spaces include continuous insulation with an R-value ranging from 20 to 35, depending on the climate zone. In a rehabilitation project, adding insulation to an existing plaza presents a challenge when establishing the overall thickness of the new assembly, given the need to meet existing conditions at the perimeter of the space, such as sidewalks and building entrances.

Creative use of insulation of varying thicknesses can achieve an area-weighted R-value that meets the energy code while mitigating potential height issues. Such strategies can also serve a dual purpose by providing positive pitch to drains to remove storm water from the hardscape. Assembly pitches of between ⅛ inch and ½ inch per linear foot are sufficient to move water without negative impacts on user comfort.

Depending on how a plaza is used and maintained, introduction of insulation boards may adversely affect the ability of a new assembly to resist compressive loads from equipment and small vehicles. High-density insulations that can achieve compressive strengths of up to 100 pounds per square inch can be used in the new assembly to address this design consideration.

Alternatively, the 2015 IECC does allow exemption for historic buildings if the code “would threaten, degrade, or destroy the historic form, fabric, or function of the building.” 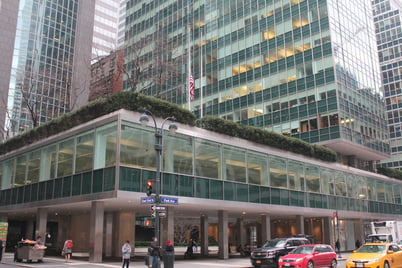 Heat Island Effect: Urban heat island effect occurs when the built environment uses an abundance of materials that absorb and retain heat (hardscapes, sidewalks, streets and building claddings). According to the U.S. Environmental Protection Agency (EPA), such choices are having an increasingly adverse impact on climate in general and cities specifically.3

Historic modern plazas, with wide expanses of concrete and stone hardscape, have become significant contributors to the heat island effect. Several strategies can reduce the impact without compromising the original design intent.

The use of low-lying native or adaptive plants in lieu of hardscape can introduce  low-maintenance landscaping that requires no irrigation, reduces heat island effect and preserves the horizontality of the original design. Alternatively, replacement of heat-absorbing paving materials with more reflective products having a solar reflective index (SRI) of 29 or more can dramatically reduce heat island effect.4

Storm Water Retention: Many municipalities now have regulations that mandate how building owners manage storm water on their properties. The goal of these regulations is to prevent runoff from leaving a site along impervious surfaces, thereby restricting the volume of water that can enter the municipal storm system.

Security: Sprawling plazas between sky-scrapers and large-scale housing projects have perhaps never provided “defensible space,” a term popularized by city planner Oscar Newman in the 1970s.5 Changing environments and the transformations of the plazas themselves have sometimes resulted in public spaces that are unused out of fear.

When Seattle was exploring options to revitalize Freeway Park, a major concern was that the threat of crime was causing the community to avoid it. While many factors were assessed, one reason identified was the evolution of the park itself: Landscaping had grown to such an extent as to limit sightlines, thus reducing security.

PPS produced a report on Freeway Park in 2005, which looked at several factors to increase security within the park, including connectivity to the surrounding neighborhood, activities within the park, minimizing “hidden entrances” and improving visibility and signage. Sometimes, careful consideration and small changes can greatly improve the vitality and safety of public spaces without compromising the original design intent. 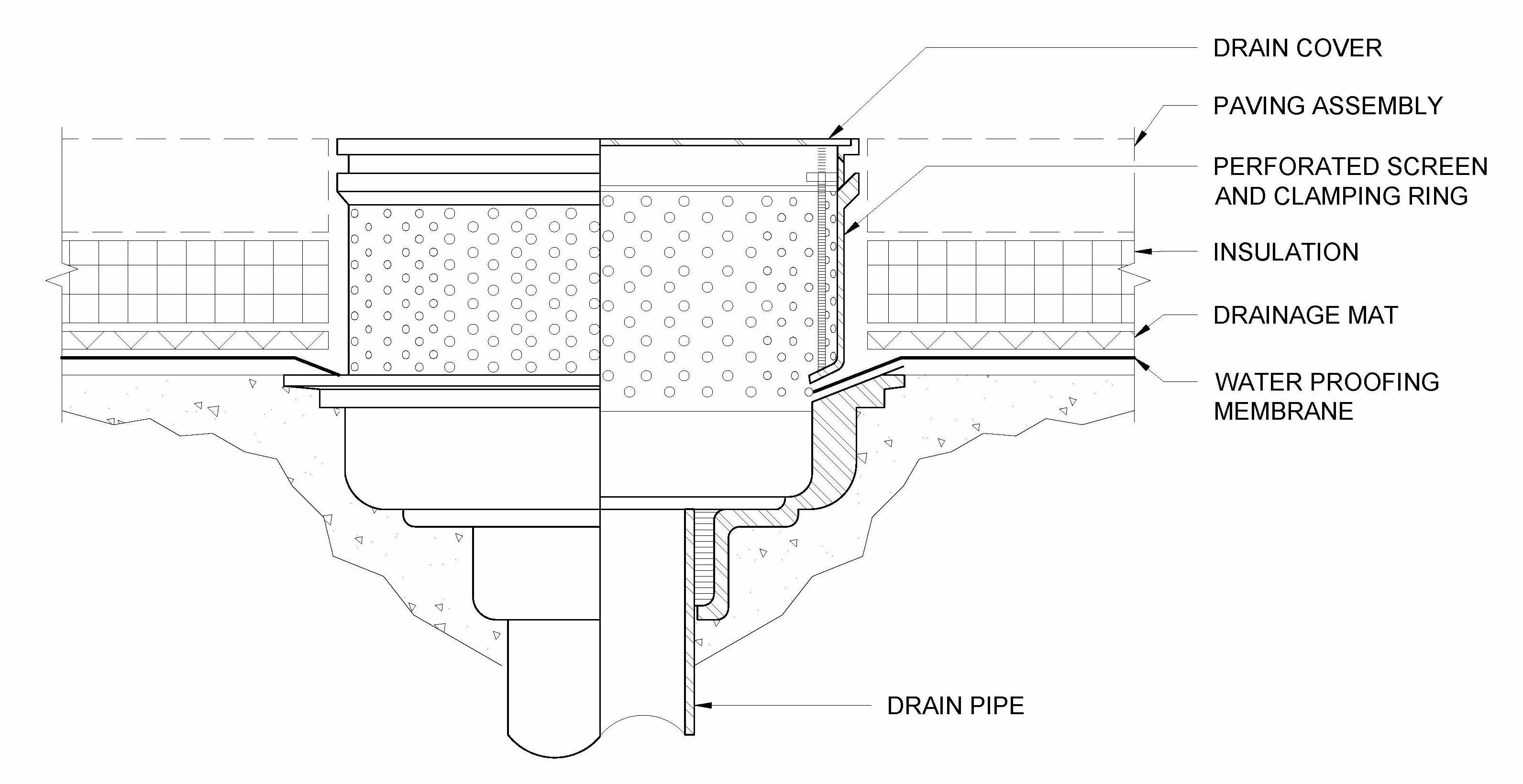 The embodied energy within plaza spaces is substantial. If a space is to undergo a major capital improvement, efforts should be made to preserve that energy through the recycling of materials (such as slabs of natural stone used as walking pavers and cladding for benches and planters) or the use of sustainable designs and durable construction.

Often, hardscapes were considered “closed” assemblies, impervious to the infiltration of water beneath the stone or concrete cladding. When water did find its way under these surfaces, the result was premature deterioration of the paving assemblies through cracking, spalling or upheaval.

Where plazas aren’t constructed on grade, new designs should consider bi-level drainage (see Figure 1) that channels water from plaza hardscapes, both at the walking surface and at the deck below, mitigating the possibility of trapping water beneath the surface and premature deterioration due to freeze/thaw cycling.

Understanding how the public space is used and its volume and type of traffic also is essential in establishing a durable design. If a plaza will see a high volume of pedestrian traffic and light vehicular use, an assembly that includes a bituminous asphalt or cementitious setting bed may be more appropriate than one set on sand.

Even after rehabilitation is complete, consideration should be given to a maintenance program to extend the plaza’s service life and protect its embodied energy. For instance, the use of certain deicing chemicals can greatly accelerate the aging of hardscape finishes. While rock salt (sodium chloride) may prove effective, it is extremely corrosive to steel and destructive to masonry and concrete.6

The historic contexts and technical issues make rehabilitation of many modernist plazas and public spaces a significant challenge. Nevertheless, a rehabilitation project presents owners and designers with a unique opportunity to preserve the past while increasing the usefulness, durability and efficiency of these spaces.

This article was originally printed in the Spring/Summer 2018 volume of the Journal of the National Institute of Building Sciences.

1Wachs, Audrey. “Plazas in Peril – Why are we wrecking our best modernist landscapes?” The Architect’s Newspaper, December 14, 2017.

Craig A. Hargrove, AIA, LEED AP is Senior Vice President and Director, Architecture with Hoffmann Architects (www.hoffarch.com/), an architecture and engineering firm specializing in the rehabilitation of building exteriors. As director of the firm’s New York office, he oversees demanding building envelope projects, leading project teams in developing cost-effective solutions for roofs, facades, windows, and plazas that meet energy performance and resiliency goals. He may be reached at c.hargrove@hoffarch.com.