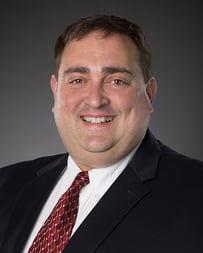 Pat first started his career out of college working in the semiconductor industry, performing testing and certification of cleanrooms and process equipment. This work took him across the states and even overseas, living on the road for most of his early career. Eventually he settled down in Houston, Texas, with his wife, Caryn, and sought a job locally that required less travel. Almost 10 years ago, he was hired at Chamberlin as an Assistant Project Manager in the Waterproofing & Caulking department. He learned waterproofing from scratch - spending time in the field, watching and listening. Over the past decade, he has worked his way up to Operations Manager and has been involved in some of Chamberlin’s highest profile projects, including the recent construction of the JW Marriott in Austin, Texas. Pat takes pride in his accomplishments at Chamberlin and says, “Watching the business grow in Austin has been very rewarding.

A Day in the Life:

Pat can attest that the early bird gets the worm. Often at the office by 5:00am, he gets organized for the day and makes sure his crews have the information, paperwork and materials they need for their projects. Throughout the day, you will find him on the job site or taking care of business in the office. He takes time to work through issues with his team, whether it is project related or technical.

Pat works to develop a relationship with each of his clients by making sure he has time in the field to interact with them personally. These relationships help him to understand the client’s point of view and how Chamberlin can best serve them.

Teamwork is a huge contributor to quality and productivity, according to Pat. “Everyone from upper management to laborer has to work together for the whole group to be successful,” he said. “Superintendents working alongside their crew not only increases production by having one more set of hands on the job, but this also motivates the crew, thereby increasing their quality.

Pat is a valuable Operations Manager,” said Art Canales, Chamberlin Executive Vice President, “he has a big heart and takes ownership of issues.  You truly understands the meaning of teamwork.

Ultimately, Pat believes with anything you do - no matter the task - do your very best, and give it everything you got.

In his down time, you may find Pat enjoying the peace and quite of a forest, as he hunts dinner for his family,or perhaps, sprucing up his yard. But his greatest joy is spending time with his family, including his two kids, Cooper and Emerson. He enjoys quality time with them by serving as their Boy Scout troop Assistant Den Leader.