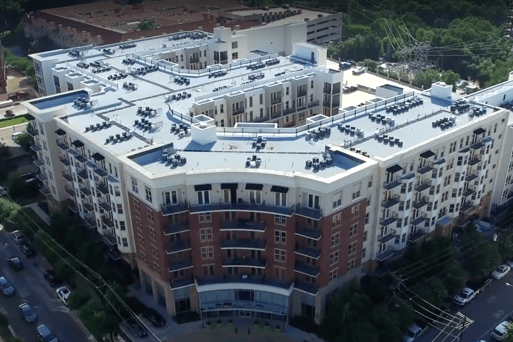 Gables Uptown Trail is a seven-story, luxury multi-family building that hosts 334 apartments and is located in Uptown Dallas, adjacent to The Katy Trail. The structure has a stucco façade, which had cracked over time. Chamberlin’s experience in building envelope repair and restoration led to them being selected to make exterior refurbishments on the mid-rise apartments.

This year-long project kicked off in January of 2017. To combat the wear and tear the elements had inflicted on the exterior of the building, Chamberlin performed joint sealant replacement, power washing, stucco repair, balcony cleaning and painting and installation of a waterproof coating on the entire building envelope. The result was a pristine façade that was watertight to protect the residents from water intrusion.

This building boasts unique aesthetics with five different colors on the façade, creating a color-by-numbers effect when matching the new coating to the preexisting colors. Chamberlin performed multiple mock-ups of caulking and coating samples to determine which colors would be the closest match to the original construction.

Before the coating application began, the crew tested the stucco for moisture. The hand-held reader reported if the moisture level was low, medium or high. For proper adhesion, the product could not be installed at any level greater than low. Drying time for the stucco had to be allotted after power washing or rain, and these times varied depending on temperature and sun exposure.

Chamberlin performed quality control checks throughout the project for the manufacturer, the consultant and the owner. Cheeseclothswere placed in sections of the coatings for pull tests, which were also performed on the joint sealants to confirm adhesion. All tests passed with flying colors.

The application of the different colored coatings took precision and detail. Where two different colors met, a razor straight line was required with no overlap in color. Chamberlin crew members handled this two-coat installation with great care, and the results impressed the entire project team. 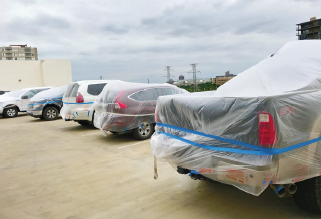 The material specified for the waterproof coating added an additional challenge to the precise application process. GE SilShield 2400 is a 100% silicone barrier that retains color beautifully while sealing out water and serving as a barrier for air intrusion. Silicone sealants are UV resistant and resilient to the elements, degrading less easily than water-based sealants. While these qualities benefit the building, they add a level of difficulty to the installation. Crew members worked meticulously to avoid dripping or splattering the coating on other areas of the building, balconies below, the sidewalk, vehicles or anything else in surrounding areas. A special cleaner is required to remove any displaced coating, and even with the cleaner many times, the coating will not come off. Tarps covered windows, railings, cars and other objects for added protection. 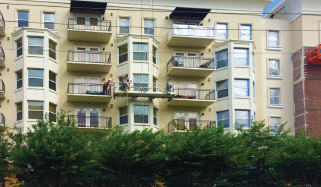 Wind and extreme heat further compounded the situation. Normally, the material cures within an hour or two, but the heat was accelerating the drying pace. This made the areas where the application strokes overlapped visible, whereas usually, the coats would blend together. To overcome the rapid drying, Chamberlin consulted with the manufacturer and added 5% paint thinner to the coating. This solution was successful and covered the visible overlaps from the one drop that was already complete.

Chamberlin performed over 100 drops with five swing stages working simultaneously to complete the building envelope restoration. The intricate design of the building posed challenges for the design and rigging of the swing stages.

Many different sizes and shapes of swing stages were built to maneuver around the facility’s multiple eyebrows, balconies and other protrusions. Chamberlin built U-shaped stages, L-shaped stages, stages of multiple widths and extensions to access the different areas of the façade. They also utilized a boom lift, scissor lift, scaffolding and a mass climber in areas a swing stage could not be hung, such as the curved façade on the building’s front.

A pitch on the roof’s parapet wall forced the anchor point for the swing stages farther into the roof’s center. Swing stages with a longer reach, such as those dropping over balconies, required anchor points even farther in. HVAC and the multitude of other roof equipment added additional challenges, leaving limited roof space for rigging. Long beams, up to 2,000 pounds of counterweights and strong back cables to prevent the beams from bending were utilized to complete this complicated rigging situation.

Chamberlin had a competent person inspect the rigging and stages every day before work began, and every crew member went through swing stage training before the job started. The project was completed with no safety incidents and all crew members returning home safely each night. Chamberlin Superintendent Jerry Elliott stated, “All the guys worked together to overcome any difficulties faced and did so safely.”