Ever notice a breeze in older buildings, even when it is not windy? Many buildings are leaking air, which means the owners are losing money. Charlotte-Mecklenburg Schools (CMS), the 19th largest school district in the U.S. with a $1.3 billion operating budget, recently decided to take action to identify buildings in the school district that might be exhibiting air leakage.

In early 2014, CMS approved an architectural and engineering guideline change proposal to incorporate air barrier testing for all new buildings, additions, and major renovations. Using this guideline, CMS’s plan was to decrease the air leakage from 0.25 cfm per square foot of exterior enclosure for buildings built in 2014, to 0.15 cfm pe 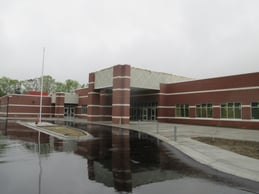 r square foot of building enclosure for buildings built in and after 2018. To help the school district determine sources of air leakage in a school built in 2015, Terracon performed air barrier testing in general accordance with the US Army Corps of Engineers (USACE) Engineering Research and Development Center (ERDC), Air Leakage Test Protocol for Measuring Air Leakage in Buildings, with a proprietary (Retro-Tec) Blower Door Testing system.

For effective use of test equipment, the building had to be split into five areas to be tested separately. Splitting up the building into separate areas proved to be a challenge due to the amount of ducts and air transfers which cross the firewalls. Each of these had to be sealed for the testing. All doors and mechanical ducts that connected with other portions of the building outside of the testing area were sealed to prevent extraneous air leakage, which can disproportionately alter the results of the test.

To run the test, all mechanical louvers, vents, and any other engineered transfer through the air barrier system to the exterior, had to be covered and sealed to prevent air leakage. All exterior doors were shut and any operable windows closed and locked. Three fans were set in a plastic frame which was placed in an exterior door frame. The three fans were connected to controllers which adjust the fan speed based on the pressure in the building. A computer records the flow through the fans and dictates to the controllers what the required pressures shall be throughout the test.

Smoke pens, devices that emit a constant stream of smoke that can be used to show air movement, were used on the interior of the building to focus in on the source of leaks during the pressurization phase of the test. A stream of smoke was moved across different surfaces that had potential for air loss, such as windows, doors, electrical outlets, roof and wall intersections, and other areas that may penetrate the air barrier. Terracon also used infrared cameras to help detect air leaks. By repeating this process, Terracon was able to identify significant sources of air leakage. For this facility, the exterior doors and the intersections of the exterior walls at the roof deck were the major offenders. At the doors, large gaps were exposed at the door locks and at the thresholds.

In this case, the allowable leakage rate equated to 0.25 cfm per square foot of exterior enclosure area which met the target standard provided by the CMS. To illustrate the amount of leakage, this result equates to a single opening of approximately 36.7 square feet or roughly 6 feet by 6 feet of equivalent leakage area.

Other areas were identified which could be easily repaired, allowing the client additional savings in energy consumption. For an idea of how much these repairs could save, The National Institute of Standards and Technology issued a report stating that an office building with a total floor area of 24,200 square feet (approximately 30% of the floor area of the school building tested by Terracon) in the same climate zone saved more than $3,000 annually when air infiltration into the building was eliminated by 83 percent from its baseline. Equating this to the floor area of the entire school building, the annual savings is approximately $10,000. By identifying the most efficient way to conduct air barrier testing for this type of school building, Terracon, in partnership with CMS, was able to show results and recommend cost-savings as well as energy conservation solutions, setting a baseline for future energy performance reviews within the District’s buildings.

Jeff Poe, Jr., EI, RRO, is an engineer in the Charlotte, North Carolina, office. He has experience in building enclosure testing, roofing design, above and below-grade waterproofing, and contract administration. Jeff can be reached at (704) 594-8939 or Jeff.Poe@terracon.com